Vaccine approval opens door for mandates, but will people return to office? 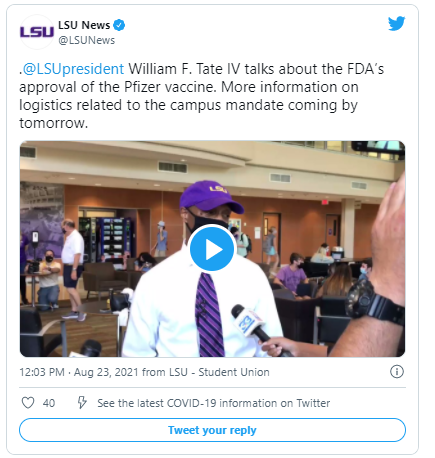 Full approval on Monday for Pfizer’s COVID-19 vaccine for ages 16 and older by The U.S. Food and Drug Administration opened the door for broader vaccine mandates by private companies, universities and government entities.

Swiftly following the full FDA approval, New York City announced all public school teachers and other staffers must be vaccinated. New Jersey followed suit with a similar mandate later in the day but will allow teachers who refuse vaccinations to test regularly.

The Pentagon’s top spokesperson announced Monday that the U.S. military will move to mandate the vaccine for the country’s 1.4 million active-duty service members now that it has full approval.

And LSU’s President William F. Tate IV held a press conference on Monday stating the school would move forward with vaccinating its students in this state hard hit by the Delta variant. He said the vaccination logistic would be shared on Tuesday.

The Chronicle of Higher Education has so far identified 753 campuses requiring vaccines for at least some students or employees. The Center on Reinventing Public Education (CRPE) is tracking developments in 100 large and urban districts around the U.S. You will find its research here.

A new poll from The Associated Press-NORC Center for Public Affairs Research found that 59% of Americans support vaccination requirements for teachers and nearly as many — 55% — say the same for students age 12 and over, who are eligible to be vaccinated. Among parents, support was lower, with 42% backing vaccine mandates for students. The AP-NORC poll of 1,729 adults was conducted Aug. 12-16.

Chevron became the first major oil and gas company to require vaccinations for some of its employees on Monday, and CVS Health also announced Monday it will require COVID-19 vaccinations for all corporate employees and certain clinical workers who interact with patients.

U.S. Surgeon General Vivek Murthy told CNN on Sunday, “For businesses and universities that have been thinking about putting vaccine requirements in place in order to create safer spaces for people to work and learn, I think that this move from the FDA, when it comes, will actually help them to move forward with those kinds of plans.”

According to a recent New York Times report, “many companies have scrapped plans to bring employees back to the office shortly. Boston Properties, which owns nearly 12 million square feet of space in the New York region, said about 40 percent of prepandemic occupants had returned to its buildings earlier in the summer, based on lobby badge swipes. In August, that figure had dipped to around 30 percent.”

For more on the return to the office, click here for CBRE’s 2021 Global Midyear Market Outlook.