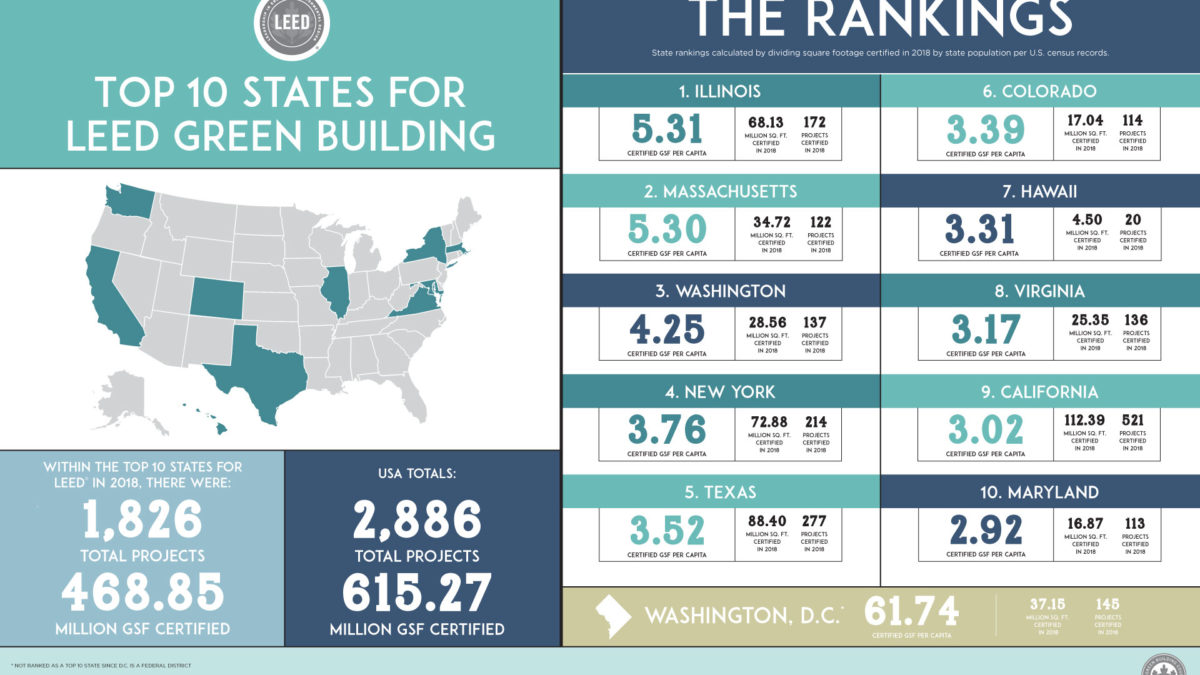 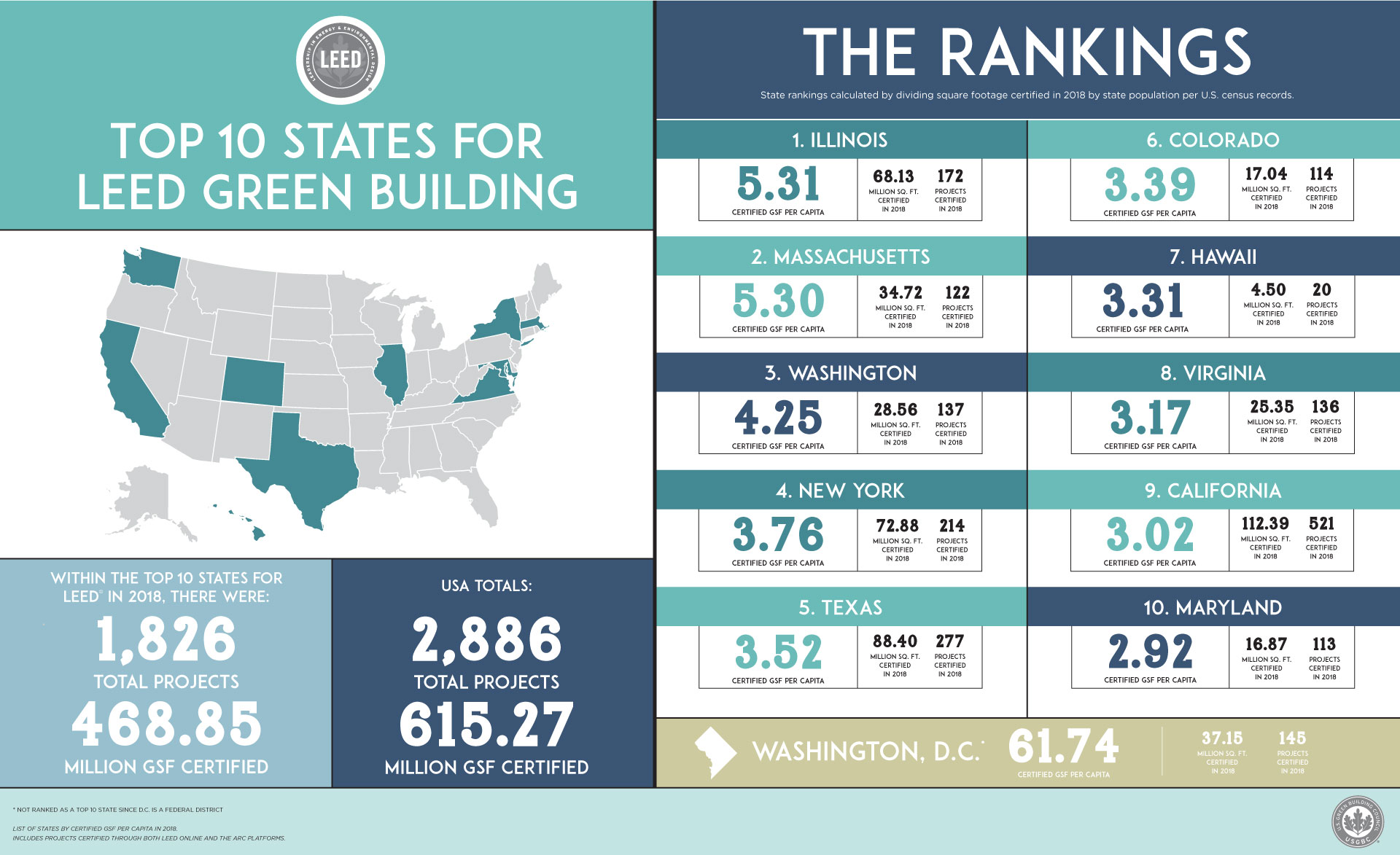 The U.S. Green Building Council released in early February its annual list of Top 10 States for LEED, the world’s most widely used green building rating system. Illinois topped the list, which ranks states based on the number of LEED-certified square feet per person. The Top 10 states for LEED are home to 128 million Americans and together include more than 468 million gross square feet of LEED-certified space. Buildings that are LEED-certified create healthier spaces for people, as well as use less energy and water, reduce carbon emissions and save money for families, businesses and taxpayers.

“Over the past 25 years, the U.S. Green Building Council, its member companies and the green building community have come together to make our planet stronger, greener and more sustainable through LEED,” said Mahesh Ramanujam, president and CEO, USGBC. “These Top 10 states are examples of how we can create lasting, measurable change and improve the quality of life for everyone in our communities. A better future requires a universal living standard that leaves no one behind—and that future would simply not be possible without the extraordinary work being done in these states.”

As the number one state for LEED certification in 2018, Illinois certified 172 green building projects representing 5.31 square feet of LEED-certified space per resident. This is the first time Illinois has taken the top spot since 2015. Washington and Texas also made triumphant returns to the Top 10 securing the highest rankings in each states’ history. In addition, Colorado made notable strides in its LEED activity moving from number 10 in 2017 to number six on this year’s list. The Top 10 list is based on 2010 U.S. Census data and includes commercial and institutional green building projects certified throughout 2018. The full rankings are as follows: 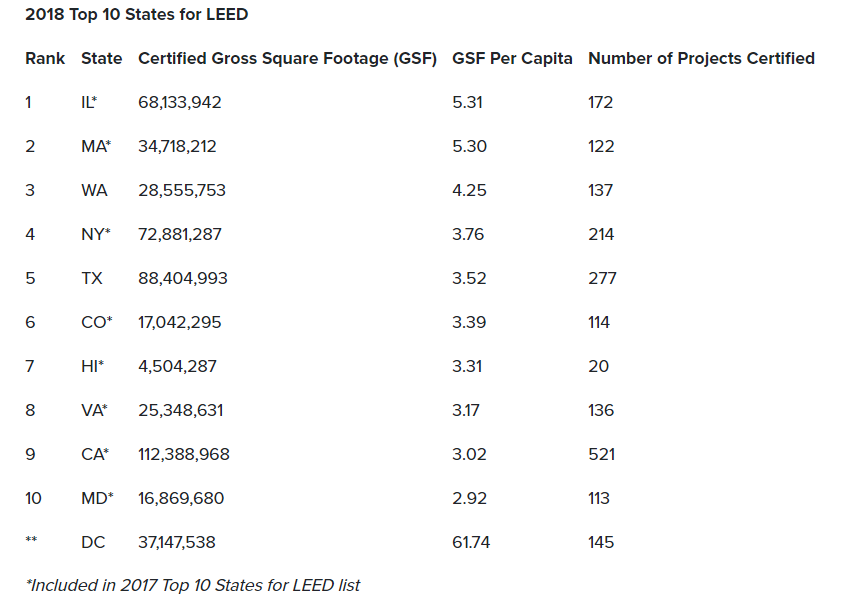 USGBC calculates the list using per capita figures to allow for a fair comparison of the level of green building taking place among states with significant differences in population and number of overall buildings. Notable projects that certified in each state in 2018 include:

While the Top 10 recognizes progress at the building level, LEED is also now used to measure sustainability performance at the city and community levels. This year, nine of the Top 10 states are also home to LEED-certified cities and communities, including Chicago, Seattle, Austin, San Diego County and more. There are currently more than 137 registered and certified LEED cities and communities around the world, representing more than 50 million people.

Despite Washington, D.C. not appearing in the official Top 10 list because of its status as a federal territory, it has consistently led the nation and in 2018 certified 61.74 square feet of space per resident across 145 green building projects. The nation’s capital has a strong legacy of sustainability leadership and in 2017 was the first city in the world to be LEED-certified.