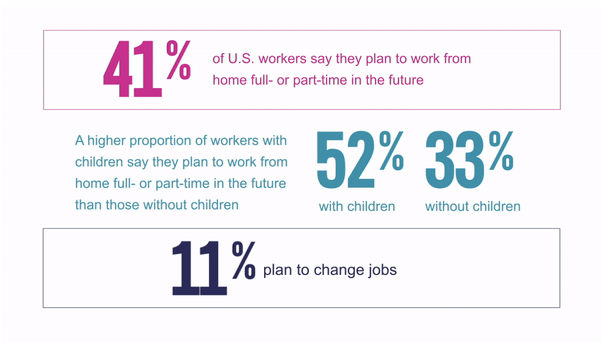 In the fifth wave of a national survey among American adults, Weber Shandwick and United Minds, the firm’s management consultancy specializing in transformation, in partnership with KRC Research, have found that 61% of U.S. workers are contemplating professional or lifestyle changes that will impact the workplace going forward. In addition, some form of remote work will be a permanent solution for nearly half of American employees. Key findings include:

Additionally, a large majority want their respective company to take a stand on equitable work practices, with 81% of employees saying it is important for their employer to reiterate zero tolerance for discrimination and harassment – an indicator of evolving expectations of employers that will impact the workplace.

Since March 2020, Weber Shandwick, United Minds and KRC Research have conducted ongoing surveys to explore consumer and employee attitudes about the response to COVID-19. In the latest survey, taken between September 2-3, 2020, respondents were asked questions related to remote work, including support and flexibility from employers, and how their ways of working may change permanently as a result of the pandemic. In addition to changes in how people work, the findings show rising comfort and productivity levels among employees working from home, and continued fear about returning to the physical workplace due to COVID-19.

“Workers across industries showed incredible resilience in quickly shifting to a remote work environment when the pandemic struck – and what we’re seeing now is the future of the workplace and workforce being re-designed in real-time,” said Kate Bullinger, president of United Minds. “Leaders who want to retain and attract top talent cannot rely on past workplace models even after the pandemic subsides.”

U.S. Workers Are Comfortable With – and Productive in – Remote Working Environments.
U.S. employees in the survey report high productivity levels while working from home, with 70% of those working from home saying they work as productively or better at home – 85% say they have the tools and resources they need.

Given the choice, 74% say they would like to continue working from home rather than go to their place of work every day.

The majority of employees working from home (63%) feel that the leadership at their company has become more accessible since the coronavirus crisis started, and many also feel more connected to their leadership and company vision, yet more disconnected from their peers:

“One guidepost for the C-suite is a heightened connection workers feel to leadership and company vision – which signals that consistent communications from business leaders during this period of remote work is helping bridge unknown gaps,” said Anthea Hoyle, executive vice president, United Minds. “But simultaneously, co-workers are feeling disconnected from each other; camaraderie has diminished. Both areas of connection – between teams and to leadership – are essential ingredients to cultural strength, and the future employee experience needs to strike the right balance between them.”

Parents Feel Supported by Employers.
Eighty-eight percent of employed parents working from home say their employer allows them the needed flexibility to take care of personal and family needs, compared to 77% of those employed without children reporting the same.

However, despite 71% of employed parents working from home reporting that their employer is providing support to help them with child or daycare and online school challenges, 11% of working parents (and 13% of working parents with children under the age of 13) are considering going from full-time to part-time.

Still, Employees Worry About Their Future with Their Employers, Including Security and Safety.
Despite positivity toward employers, half of employees working from home (52%) are concerned about the future of their company and job, and 47% worry their employer will bring them back to work before it is safe to go back.

This is a consistent dichotomy revealed in Weber Shandwick’s annual poll, Civility in America, taken each year from 2010-2019. While workplaces weren’t already perceived as a civility refuge, in 2017 employees reported that their place of employment was civil (86%) – while 69% of total respondents held the belief that the U.S. has a major civility problem. By 2019, the numbers had reached a higher contrast: the majority of Americans (93%) identified a civility problem in our society, while 89 percent of employees reported that their workplace is very or somewhat civil.

Employees Want Companies to Take Stances on Equitable Work Practices and See Gaps in DEI Action.
Seventy percent of employees say their employer has created a fair work environment, with 76% agreeing that their employer does not tolerate discrimination. But close to half (46%) of employees say their company says all the right things about diversity, equity and inclusion, but does not do what they say.

An equally high majority want their respective company to take a stand on equitable work practices.

Consumers also take notice of company behaviors, and report doing business with – and avoiding – companies because of their behavior, including the way they treat employees. Thirty-five percent of consumers say they have started or continued doing business with a company because of its employee treatment (28% have stopped for the same reason), while 36% say they have started or continued business because of a company’s commitment to diversity, equity and inclusion (versus 25% who have stopped for that reason).

“These results show – from the employee perspective – a gap between employer commitments to DEI and the actions they’re taking to make good on those commitments. This poses reputational risk for any organization,” said Tai Wingfield, senior vice president and Diversity, Equity & Inclusion head, United Minds. “Consumers are watching corporate commitments to DEI and treatment of employees. It’s critical for organizations to not only be aware of this expectation among its stakeholders, but take action, reexamining and living the core values of the business.”