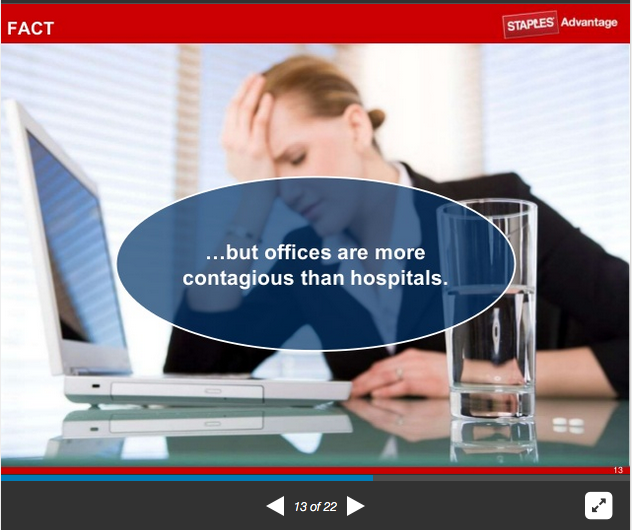 Employees and employers are well aware of the impact of the flu on workplace productivity, but more than half of people surveyed (53 percent) say they have gone to work with the flu, according to the sixth annual flu season survey from Staples, a leading provider of supplies that help keep offices healthy. The findings show a strong understanding of how to stop the flu from spreading, but a disconnect in following key prevention techniques.

Respondents are knowledgeable about the flu and flu prevention 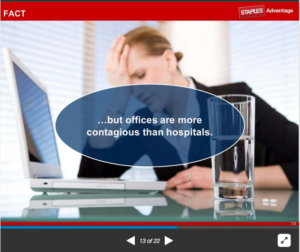 Despite high awareness, employees continue to work when sick

But employees still come to work when sick. Of the 30 percent of respondents who came down with the flu last year, 55 percent still went to work sick, and although 59 percent say they should stay home when sick for two to three days, only 43 percent actually do so.

Employees are mindful of sick colleagues, with 88 percent of them having encouraged sick colleagues to go home—even if they don’t practice what they preach.

“It’s encouraging to see that employees have a strong understanding of flu risks and prevention, but there’s still work to be done,” said Dr. Charles Gerba, a professor of microbiology and environmental sciences at the University of Arizona who studies the transmission of pathogens through the environment. “Staples’ survey shows that less than ten percent of respondents sanitize their phone and only one percent sanitize their tablet – two of the dirtiest items employees come in contact with throughout the day. The flu wreaks havoc on U.S. employees and in turn on businesses every year.  Simple measures such as cleaning, sanitizing and limiting exposure can make a huge difference.”

According to the survey,most employees (58 percent) are still coming to work sick because they feel there is too much going on at work to take a sick day, an uptick from 30 percent in 2012. Half of them feel the pressure to be at work or “tough it out,” and 25 percent don’t feel confident that someone else can handle their work when they’re out sick.

Workers agree that workplace illness’s impact on a business is about as damaging as a natural disaster, more damaging than a product/customer service issue and nearly as damaging as a security breach.

“The flu is responsible for an estimated 70 million missed work days and billions of dollars in lost office productivity each year, so clearly businesses need to provide education and tools to keep workers healthy,” said Chris Correnti, Vice President of Staples Facility Solutions at Staples Advantage, the business-to-business division of Staples.

It’s not just missed workdays that have a detrimental impact – 66 percent of respondents say presentism – going into work sick but not maintaining productivity – is worse for a business than an employee staying home, a sharp increase from 31 percent last year.

The survey was conducted by Redshift Research among 1500 U.S. Office workers.  All were working full-time and spend at least 50 percent of their time working in an office environment. 704 were managers and the remaining 796 were general office workers. Results of any sample are subject to sampling variation.