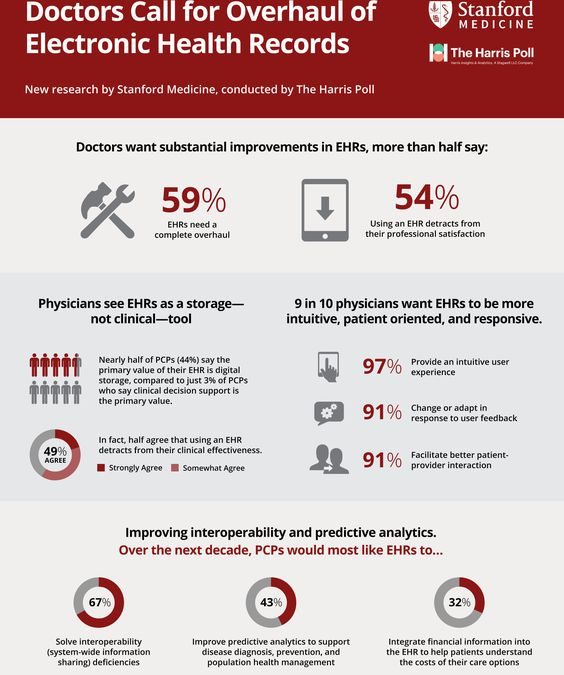 In a poll conducted online of over 500 primary care physicians (PCPs), respondents expressed a range of views on the current state of EHRs, the impact EHRs have had on their professional satisfaction, and their potential as clinical tools. The results will be presented today at a national symposium hosted by Stanford Medicine, which will convene health leaders to discuss the future of EHR technology.

Physicians see value in EHRs, but want substantial improvement
Sixty-three percent of physicians think EHRs have generally led to improved patient care, and 66 percent are at least somewhat satisfied with their current systems; however, a large portion see room for improvement.

PCPs point to EHRs as detracting from professional satisfaction and clinical effectiveness; most believe EHRs contribute to physician burnout
PCPs also had much to say on the impact that EHRs had on the quality of their work life. More than half reported that using an EHR detracts from their professional satisfaction and, more importantly, their clinical effectiveness. Even more agreed that EHR use contributed to the number of hours worked daily and believed that EHRs are a large contributing factor to the physician burnout crisis.

PCPs value EHRs primarily for data storage, not clinical abilities
Nearly half (44 percent) of PCPs report that the primary value of their EHR is data storage, compared to clinical abilities such as disease prevention/management (3 percent), clinical decision support (3 percent), and patient engagement (2 percent). These responses confirm that physicians largely see EHRs as a storage utility, rather than a clinical tool designed to help them improve patient care.

Ideas for improvement
Those polled believe EHR systems can be improved in the following ways:

“EHRs have transformed how health care is documented in the U.S., but for all the information we’ve now captured digitally, we are rarely wiser as a result,” said Lloyd Minor, M.D., dean of the Stanford University School of Medicine.“Insights that could lead to better patient care or new medical discoveries remain buried within piles of disconnected data. Moreover, EHR use has eroded professional satisfaction among physicians. This national poll underscores what many physicians have felt for a while: their needs are not reflected enough in the design of these systems. Fixing the problem goes far beyond technology, and it will take many stakeholders working together to make EHRs more user-friendly and capable of achieving their true potential.”

“When we first set out to help Stanford Medicine understand the perceptions of electronic health record systems among primary care physicians, the focus was on identifying what problems doctors are encountering to inform the implementation of future solutions,” said Deana Percassi, Managing Director at The Harris Poll. “The results of this poll underscore the vital role EHRs play in our national health care conversation.”

Stanford Medicine hosted national symposium on June 4 to discuss the implications of this new research as well as the future of EHRs. Experts in patient care, technology, design thinking, and public policy convened to reimagine what EHRs can do for physicians and their patients.

The EHR National Symposium Planning Committee is comprised of subject matter experts from a range of backgrounds – the full membership can be found here.

A full copy of the research can be found here: med.stanford.edu/ehr/electronic-health-records-poll-results

Method
The survey was conducted online by The Harris Poll on behalf of Stanford Medicine between March 2 and March 27, 2018 among 521 PCPs licensed to practice in the U.S. who have been using their current EHR system for at least one month. Physicians were recruited via snail mail from the American Medical Association (AMA) Masterfile. Figures for years in practice by gender, region, and primary medical specialty were weighted where necessary to bring them into line with their actual proportions in the population of PCPs in the U.S.