Six airlines to change terminals in December in LaGuardia 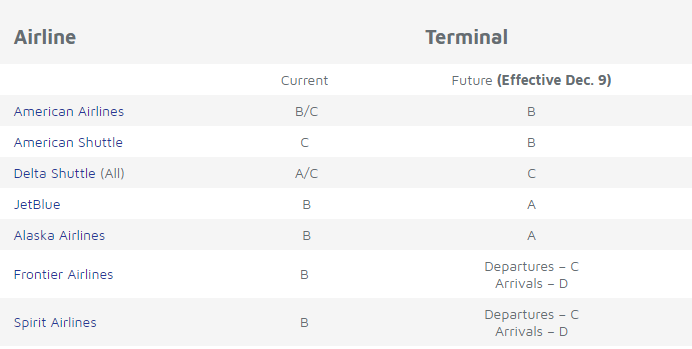 American Airlines, Delta Air Lines, JetBlue Airways and three other airlines will consolidate their flight operations as part of major relocations of airline carriers at LaGuardia Airport beginning Saturday, Dec. 9, an initiative designed to streamline passenger travel in conjunction with ongoing construction to transform the 78-year-old facility into a brand new, unified airport.

Under an agreement reached between the Port Authority and the airlines, the following changes will take effect on Saturday, December 9:

LaGuardia is in the midst of a transformation to create a 21st century unified airport, with modern terminal amenities and gates that can accommodate larger aircraft. Consolidation of these six airlines will help further streamline operations and enhance the customer experience at LaGuardia.

“We want to provide LaGuardia’s passengers and employees with ample time to become aware and prepare for these significant changes to existing flight operations,’’ said Lysa Scully, the Port Authority’s general manager at LaGuardia Airport. “We are working with our airline partners to make the terminal consolidation changes as convenient as possible for our passengers as they navigate the airport during this exciting – but extremely busy – time in LaGuardia’s storied history.”

Consolidation of aircraft operations for American and Delta will help make airfield movements more efficient, helping to reduce on-the-ground delays. It also will improve the experience for passengers. All of American’s customers, for example, will be dropped off, checked in and picked up at Terminal B regardless of where they are flying to or from. Delta Shuttle customers in Terminal C will have access to amenities that include a 7,600-square-foot Delta Sky Club, chef-driven restaurants, an expansive food hall, and upscale retail.

The ongoing $8 billion transformation of the 680-acre LaGuardia Airport – nearly 75 percent of it financed by private capital – will create an entirely new airport with a state-of-the-art unified facility. The redevelopment includes a revamped on-airport and access roadway network, with planning underway for a new AirTrain LaGuardia connection to provide convenient, direct rail access to the airport.

The Port Authority and LaGuardia Gateway Partners are advancing a $4 billion public-private partnership to replace the deteriorating and outmoded Terminal B that opened in 1964 into a state-of-the-art new Terminal B. The world-class project is designed to move LaGuardia into the future with superior customer amenities, increased passenger capacity and reduced congestion.

Delta has committed $3.4 billion to build a new 21st century passenger terminal to replace the existing Terminals C and D, with a $600 million investment from the Port Authority to help cover costs of the project and related supporting infrastructure.

Together, the new terminals will be unified and located closer to the Grand Central Parkway, allowing more airfield room for taxiing aircraft and gate space for modern aircraft. The structure will add terminal space and a Central Hall, linking the new Terminal B to Delta’s future new terminal on the airport’s eastern end.

For information and real-time updates on airport conditions, visit http://laguardiaairport.com/.