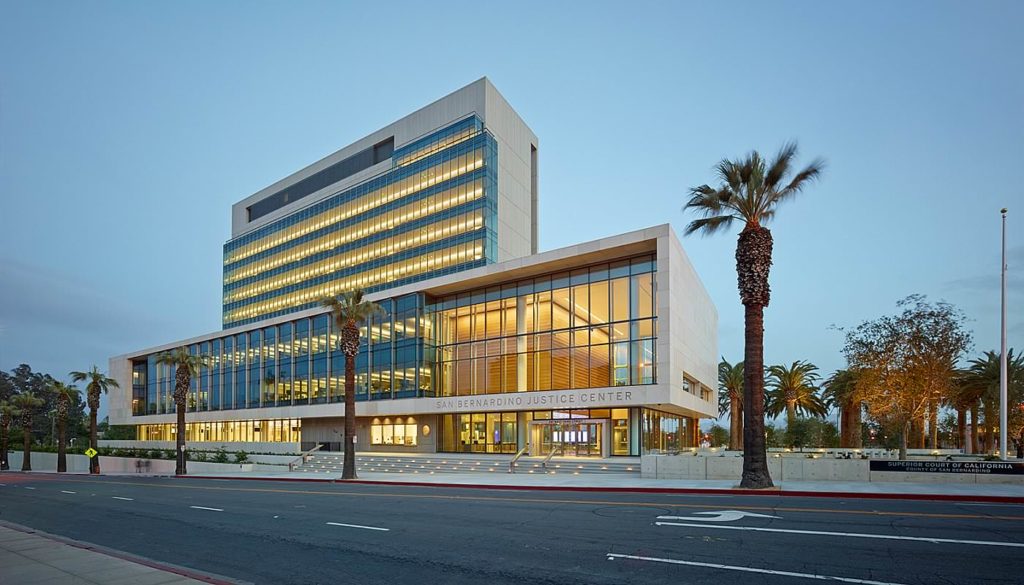 The San Bernardino Justice Center in San Francisco has received the highest honor from the American Institute of Architects’ Academy of Architecture for Justice (AIA AAJ)—a 2015 Justice Facilities Review Award Citation. The new Superior Court of California for the County of San Bernardino was managed by the Capital Program of the Judicial Council of California and designed by Skidmore, Owings & Merrill LLP (SOM), under the leadership of SOM Design Director Michael Duncan, and in collaboration with general contractor Rudolph and Sletten Inc.

One of the largest state courthouses to date and the most significant single building project to occur in San Bernardino in decades, the Justice Center has previously received multiple awards and other recognitions. The LEED® Gold-certified building bridges the scales of downtown development to unify the urban fabric, creating a visible landmark for the city while engaging the public with vibrant open space. Consisting of an 11-story courtroom tower and an interconnected, three-story podium, the 384,000-square-foot building contains 35 courtrooms and two hearing rooms. It also improves the efficiency of the courts by consolidating functions that had previously been spread throughout the county across seven different buildings. Standing at a height of 200 feet, San Bernardino Justice Center is one of the tallest seismically base isolated buildings in the United States and the tallest building in San Bernardino County.