PHX reduces water use by 5.3 million gallons per year with xeriscape 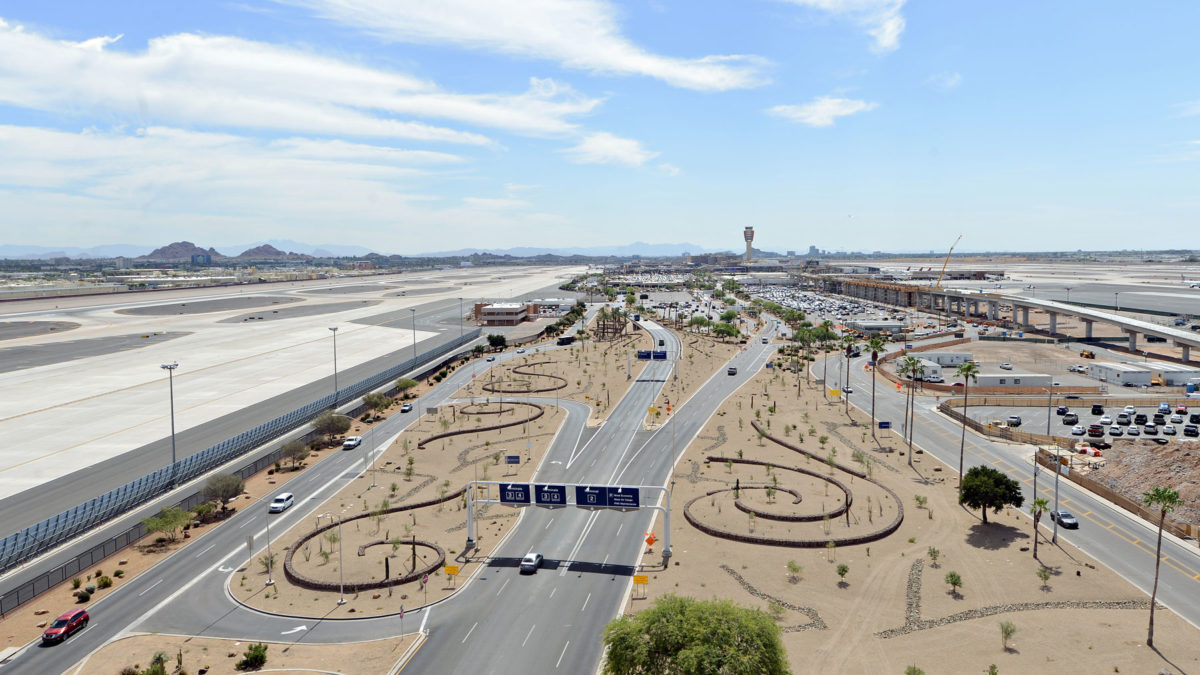 A program to replace the green grass turf with native desert landscape around Phoenix Sky Harbor International Airport is anticipated to save $400,000 annually in labor and materials as well as millions of gallons of water.

This turf replacement and landscaping project, which was completed in June, is a step toward a more sustainable future for the airport—and the city. This region is known for its dryness and intense summer heat, which puts a premium on water. That makes water conservation essential for the Phoenix metropolitan area’s long-term sustainability.

Water consumption at the airport averages 30 million gallons per month, necessitating such conservation efforts like the use of low-irrigation xeriscape. Removing all grass turf that is high in water use from Sky Harbor grounds will dramatically reduce water usage by 5.375 million gallons a year.

In place of the grass that also required high maintenance as well as water, suitable desert scenery is in its place:

Succulents and drought-tolerant plants are hallmarks of the desert, but another new landscape feature that was created as part of this project is meant to evoke aviation imagery from an unexpected source: rock-filled gabion baskets.

Gabion baskets are typically used near slopes and banks to combat water erosion as well as offer an eye-pleasing element. There are now 8,950 linear feet – or 1.7 miles – of gabions in areas where turf used to grow, and they are designed to mimic the swirling wingtip vortex created by high-speed jets.

“This union of primitive landscaping and high-tech, airborne jets is the perfect celebration of the job we do and the place where we work,” said James E. Bennett, director of aviation services. “Visitors arriving from around the world are now welcomed by the sight of terrain that reflects our natural Sonoran Desert habitat and commitment to environmental sustainability.”

“In a desert city like Phoenix, every drop counts,” said Phoenix Water Services Director Kathryn Sorensen. “By making the switch to xeriscape, Phoenix Sky Harbor is not only honoring our city’s native landscapes, but also significantly reducing its water use.”

“Phoenix is deeply committed to sustainability and has pledged a thirty percent reduction in greenhouse gases community-wide by 2025. A vital part of these conservation efforts is keeping water top of mind in every decision we make,” she said. “Steps, such as those taken by Sky Harbor, to reduce water use ensures our beautiful city will continue to thrive for generations to come.”