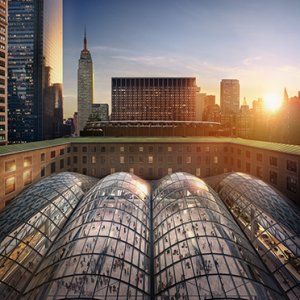 The new Moynihan Train Hall will be a critical part of the Penn Station complex redevelopment, anchoring the growing Far West Side of Manhattan. (Photo courtesy of SOM.)

New York Gov. Andrew Cuomo announced plans to move forward with a $1.6 billion overhaul of Penn Station, with design led by Skidmore, Owings & Merrill (SOM). The redevelopment will transform the James A. Farley Building on 34th Street and Eighth Avenue into the Moynihan Train Hall. The project is slated for completion in 2020.

“Fifty years after the loss of the original Penn Station structure, passengers will once again experience a world-class rail hub worthy of New York,” said Cuomo. “The Farley Building’s Moynihan Train Hall is two decades in the making, and we are proud that this project is finally a reality. With better access to trains and subways and state-of-the-art infrastructure, the Moynihan Train Hall seamlessly joins history, architectural design and function, bringing the nation’s busiest rail station into the 21st century.”

“The 255,000-square-foot Moynihan Train Hall is slated to feature 70,000 square feet of new commercial, retail, and dining venues. In addition to the introduction of a Ninth Avenue entrance, the train hall will also house nine platforms and 17 tracks, while a 92-foot-tall skylight will be installed above the hall’s iconic steel trusses. The transformation will expand Penn Station’s total floor space by more than 50 percent.”

See gallery of renderings for the station from SOM.