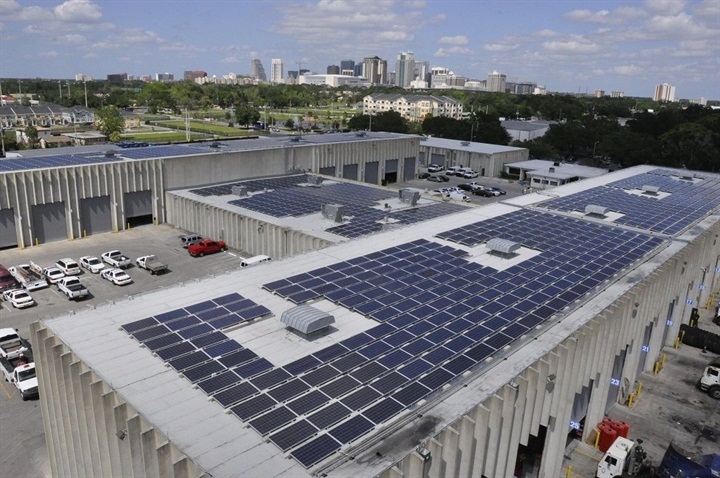 The city of Orlando has reduced energy consumption in its 70,000-square-foot maintenance fleet facility by 29.5% from a 2010 baseline. This was done through various facility updates, including the installation of a photovoltaic array, said Fleet Manager Daryl Greenlee.

The facility includes a service garage and administrative office building built in 1998 that serves the city’s municipal fleet vehicles and rolling service equipment. The 50-bay “H” garage, so named by its shape, has undergone extensive sustainability-centric infrastructure upgrades since 2010.

Beginning in 2011 with the American Recovery and Reinvestment Act of 2009 and Energy Efficiency and Conservation Block Grant, the fleet replaced the heating, ventilation, and air conditioning rooftop units with high efficiency, multiple-stage heat pumps and the antiquated building automation system with a native BACnet Web-based energy management system (EMS). The EMS was standardized across 24 properties in the city under the same project.

In January 2013, it installed a 420-kilowatt leased solar photovoltaic array. To date, that system has now produced more than 1.5 million kilowatt hours of renewable energy onto the grid. The leased array output is billed at a negotiated rate and does not impact the kilowatt per hour consumption of the facility.

The garage has also undergone a complete LED lighting retrofit of interior, garage, and exterior fixtures, and the compressed air system was recently renovated to variable speed scroll compressors controlled by the EMS. With the installation and automation of facilities equipment, fleet operates at net-zero during the daylight hours, Greenlee said.

In addition to these energy conservation measures, the fleet garage also has multiple electric vehicle-charging infrastructure and is currently undergoing the installation of a 46-vehicle capacity time-fueling compressed natural gas (CNG) fueling station for solid waste and other large city vehicles, Greenlee added.