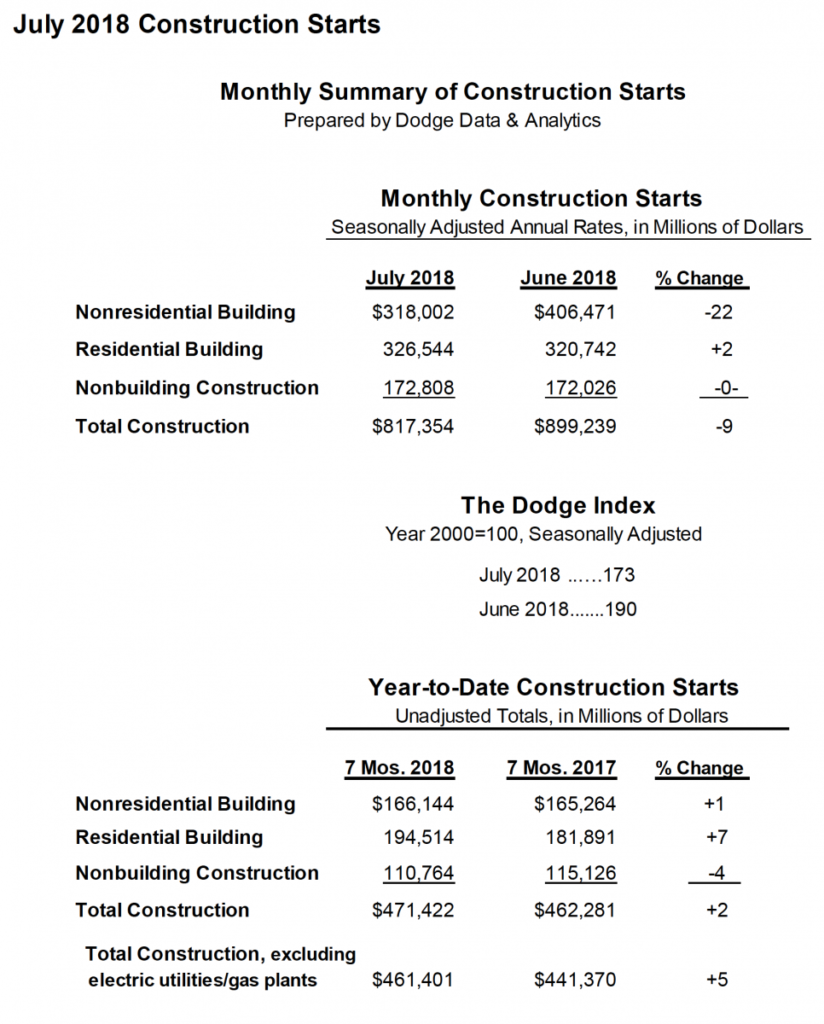 At a seasonally adjusted annual rate of $817.4 billion, new construction starts in July fell 9 percent from the elevated pace reported in June, according to Dodge Data & Analytics. The latest month’s decline followed strong gains for total construction starts during the previous two months, with May up 14 percent and June up 11 percent. By major sector, nonresidential building dropped 22 percent after soaring 59 percent in June, which had been lifted by the start of two massive manufacturing plants and two massive office buildings. While July did see several large manufacturing and office projects reach groundbreaking, they were not the same magnitude as what took place in June. The other two major sectors in July held close to their June amounts, with residential building up 2 percent and nonbuilding construction unchanged. During the first seven months of 2018, total construction starts on an unadjusted basis were $471.4 billion, up 2 percent from the same period a year ago. If the volatile electric utility/gas plant category is excluded, total construction starts during the January-July period of 2018 would be up 5 percent compared to last year.

The July statistics produced a reading of 173 for the Dodge Index (2000=100), down from the 190 for June which was the highest level so far during 2018. Looking at the first six months of 2018 on a quarterly basis, which eases some of the swings present in the monthly data, the Dodge Index averaged 165 during the first quarter and 170 during the second quarter. July’s 173 shows that at least the initial month of the third quarter is continuing the gradual upward trend shown by the first two quarters of this year.

“The pattern of construction starts on a monthly basis is often affected by the presence or absence of very large projects, and several exceptionally large projects boosted activity in June to an unsustainably high amount,” stated Robert A. Murray, chief economist for Dodge Data & Analytics. “These June projects included a $6.5 billion uranium processing plant in Tennessee and a $1.7 billion petrochemical plant in Texas, as well as the $1.8 billion Spiral office tower in New York and a $665 million office tower in Chicago. While July also featured the start of several large projects, such as a $2.4 billion petrochemical plant in Texas and a $750 million data center in Alabama, the lift from very large projects in July was less than what took place in June. Still, the pace of construction starts in July came in 2 percent above the average for the second quarter, which is consistent with the sense that overall construction starts continue to trend upward, notwithstanding July’s steep decline compared to June. The current year has seen the mounting headwinds of higher material prices and higher interest rates, but it’s also seen the tailwinds of healthy economic growth, some easing of bank lending standards, and the increased funding for public works programs coming from the federal appropriations legislation passed in March. Amidst the monthly ups-and-downs, the broad trend for construction starts during 2018 remains one of modest expansion.” 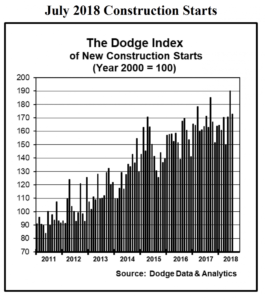 Nonresidential building in July was $318.0 billion (annual rate), down 22 percent from June’s heightened volume. The manufacturing plant category plunged 60 percent from June, which had been boosted in particular by the U.S. Department of Energy’s $6.5 billion uranium processing facility in Oak Ridge, Tennessee. If this project is excluded from the June construction start statistics, manufacturing building in July would have shown a 37 percent gain, while only modest declines would have been reported in July for nonresidential building, down 3 percent; and total construction, down 1 percent. July did include the start of a $2.4 billion petrochemical plant in Channelview, Texas, and a $400 million submarine manufacturing facility in North Kingstown, Rhode Island. The commercial building categories as a group slipped 5 percent in July after the 25 percent increase reported in June. Office building fell 23 percent from June that included the $1.8 billion Spiral office tower in the Hudson Yards district of Manhattan and a $665 million office tower on North Wacker Drive in Chicago. The office building category in July did see groundbreaking for three very large data centers – a $750 million Facebook data center in Huntsville, Alabama, a $600 million Google data center in Stevenson, Alabama, and the $288 million Sentinel data center in Sterling, Virginia. Large office buildings that reached groundbreaking in July were the $250 million office portion of the $330 million Block 71 mixed-use building in Austin, a $181 million office building in Chicago, and a $97 million Avalon office building in the Atlanta area. Through the first seven months of 2018, the top five metropolitan areas ranked by the dollar amount of new office starts were – New York, Washington, D.C., Chicago, Omaha, Nebraska, and Boston. (The Omaha NE metropolitan area included a $1.0 billion Facebook data center expansion that was entered as a May construction start.) Warehouse construction starts eased back 1 percent in July, although the latest month featured the start of three Amazon fulfillment centers located in Spokane, Washington, ($181 million), Tulsa, Oklahoma, ($150 million), and Burlington, New Jersey, ($150 million). On the plus side for commercial building in July, hotel construction jumped 37 percent with the help of the $450 million Omni Boston Seaport Hotel in Boston, the $212 million hotel portion of the $300 million Aman Hotel & Condominiums in New York, and a $150 million JW Marriott Hotel in Tampa, Florida. Store construction improved 10 percent in July, and the commercial garage category rose 6 percent with the help of a $100 million parking deck project at Atlanta’s Hartsfield-Jackson International Airport.

The institutional building categories as a group dropped 10 percent in July, following a 13 percent increase in June. The healthcare facilities category pulled back 35 percent after its 110 percent June hike, although the latest month did include the start of a $188 million hospital in Los Angeles CA, a $100 million hospital in Easton, Pennsylvania, and a $100 million hospital in Quakertown, Pennsylvania. The amusement and recreational facility category dropped 25 percent in July, falling for the second month in a row. Educational facility construction retreated 12 percent after June’s 21 percent increase, even with the July start of several large high school projects such as a $128 million high school in Saugus, Massachusetts,  and a $115 million high school in Roseville, California. Running counter to the broad decline for institutional building in July was a 28 percent increase for transportation terminals, led by two noteworthy airport terminal projects – the $650 million main terminal upgrade at Denver International Airport and the $268 million Concourse D project at Nashville International Airport. The public buildings category jumped 56 percent in July, reflecting groundbreaking for the $207 million Center for Law Enforcement and Public Health in Philadelphia, Pennsylvania, and church construction edged up 2 percent from a very weak June.

Residential building in July was $326.5 billion (annual rate), advancing 2 percent. Single family housing registered a modest 3 percent gain, although in a broad sense this project type continues to hover around the level of activity established at the end of 2017. By geography, single family housing showed this performance for July – the South Central and West, each up 5 percent; the South Atlantic, up 2 percent; and the Midwest and Northeast, each unchanged from the previous month. Multifamily housing in July receded 1 percent, after the 8 percent gain reported for June. There were seven multifamily projects with a construction start cost of $100 million or more that reached groundbreaking in July, matching the seven such projects that were reported for June. The large multifamily entries in July were led by the two projects in Brooklyn NY – the $524 million multifamily portion of a $600 million mixed-use building and the $375 million redevelopment of what had previously been a Macy’s garage. Other large multifamily projects that reached groundbreaking in July were a $200 million multifamily tower in Houston and the $174 million multifamily portion of a $255 million mixed-use building in Los Angeles. In July, the top five metropolitan areas ranked by the dollar amount of multifamily starts were – New York, Washington, D.C., San Francisco, Chicago and Los Angeles. Metropolitan areas ranked 6 through 10 were – Houston, Dallas-Ft. Worth, Baltimore, Boston, and Denver.

Nonbuilding construction in July was $172.8 billion (annual rate), holding steady with the pace reported in June. The public works categories as a group were up a slight 1 percent in July, following a 34 percent slide in June. Highway and bridge construction grew 8 percent, helped by such July projects as a $203 million state highway tollway in the McAllen, Texas, area and a $177 million bridge rehabilitation project in Boston. Through the first seven months of 2018, the top five states ranked by the dollar amount of highway and bridge construction starts were – California, Texas, Florida, New York, and Pennsylvania. Sewer construction jumped 70 percent in July, aided by the start of the $225 million headworks facility in San Francisco. The other two environmental public works categories retreated in July, with water supply construction down 1 percent and river/harbor development down 17 percent. The miscellaneous public works category (pipelines, mass transit, and site work) fell 29 percent in July. Offsetting the slight gain reported for public works in July was a 4 percent decline for electric utilities/gas plants. Providing some support to July’s electric utility/gas plant total were the start of five large wind farms, with three located in Iowa ($450 million, $250 million, and $136 million), while two were located in North Dakota ($225 million and $85 million).

The 2 percent gain for total construction starts on an unadjusted basis during the January-July period of 2018 reflected a varied pattern by major sector. Residential building year-to-date increased 7 percent, with single family housing up 7 percent and multifamily housing up 6 percent. Nonresidential building year-to-date grew 1 percent, as a 52 percent jump for manufacturing plant construction offset slightly weaker activity for commercial building, down 3 percent; and institutional building, down 5 percent. Nonbuilding construction year-to-date dropped 4 percent, with a 52 percent plunge for electric utilities/gas plants outweighing a 7 percent rise for public works. By geography, total construction starts during the first seven months of 2018 revealed this performance – the South Central, up 11 percent; the South Atlantic, up 6 percent; the Midwest, unchanged from the same period a year ago, the Northeast, down 3 percent; and the West, down 4 percent.