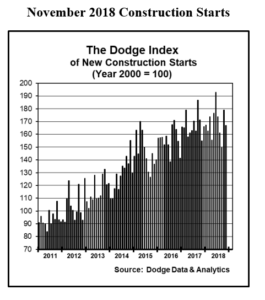 November’s data produced a reading of 167 for the Dodge Index (2000=100), down from a revised 179 for October and returning the Index to a level closer to the 166 average for the full year 2017.  Through the first eleven months of 2018, the Dodge Index averaged 169.  “Amidst the monthly ups-and-downs, the construction start statistics show that on balance the construction industry expansion was still underway in 2018, although the rate of growth has slowed considerably from the 7 percent gains for total construction reported during 2016 and 2017,” stated Robert A. Murray, chief economist for Dodge Data & Analytics.

“Several features stand out about the pattern of construction starts during 2018,” Murray continued.  “Nonresidential building through eleven months has stayed within 2 percent of the enhanced activity registered during 2017, reflecting a varied performance by project type.  The commercial building segment revealed more growth in dollar terms for hotels and office buildings, with the latter boosted by the start of such projects as the $1.8 billion Spiral office tower in New York, a $665 million office tower on North Wacker Drive in Chicago, as well as several massive data center projects.  The institutional building segment has benefitted from more growth for educational facilities and amusement-related projects, but transportation terminal starts have settled back from an exceptional amount in 2017 to what’s still a healthy volume in 2018.  Manufacturing plant construction has shown wide swings month-to-month, yet for 2018 as a whole this project type continues to trend upward.  With regard to residential building, multifamily housing has seen renewed growth in 2018 after its loss of momentum in 2017, but single family housing has essentially plateaued following the advances registered at the outset of 2018.  For nonbuilding construction, the public works segment has shown growth for highways and bridges, helped by the 2018 federal omnibus appropriations bill passed back in March, although pipeline construction starts have eased back from a robust 2017.  New electric utility/gas plant starts, despite the occasional jump such as reported in November, have continued to trend downward over the course of 2018.”

Nonresidential building in November was $279.9 billion (annual rate), down 15 percent from October.  The manufacturing plant category plunged 71 percent from an October amount that was boosted by a $1.6 billion natural gas processing plant in Douglas, Wyoming, as well as a $400 million wood products plant in Lexington, North Carolina, a $400 million natural gas processing plant in Watford City, North Dakota, and a $320 million biofuel refinery in Lakeview, Oregon.  The largest manufacturing plant projects entered as November construction starts were a $213 million cheese processing plant in St. Johns, Michigan, and a $120 million steel mill in Sedalia, Missouri.  The institutional building categories as a group dropped 23 percent in November after registering a 32 percent hike in October.  The transportation terminal category plunged 73 percent from October that included the start of the $1.4 billion Terminal One building at Newark Liberty International Airport and a $655 million concourse expansion project at Denver International Airport.  Amusement-related work dropped 18 percent from October that included groundbreaking for the $860 million expansion of the Las Vegas Convention Center in Las Vegas.  Easing the amusement category’s November decline were the start of two additional large projects in Las Vegas – the $450 million Madison Square Garden Sphere performance venue and the $323 million Caesar’s Forum Convention and Meeting Center.  Decreased activity in November was also reported for healthcare facilities, down 8 percent; and public buildings, down 49 percent; while the church construction category ran counter with a 45 percent jump after a very weak October. Educational facilities, the largest institutional building category, retreated 6 percent in November despite groundbreaking for the $164 million Dayton Avenue elementary and middle school campus in Passaic, New Jersey, and a $140 million addition to the W.K. Kellogg Institute and Dental Building at the University of Michigan in Ann Arbor, Michigan.

Through the first eleven months of 2018, nonresidential building was down 2 percent compared to the same period a year ago.  The institutional building group retreated 8 percent year-to-date after jumping 19 percent during the first eleven months of 2017, with reduced activity reported this year for transportation terminals, down 44 percent; church construction, down 24 percent; healthcare facilities, down 10 percent; and public buildings, down 1 percent.  The commercial building group increased 1 percent year-to-date, with gains for office buildings, up 14 percent; and hotel construction, up 13 percent; but declines for commercial garages, down 1 percent; warehouses, down 7 percent; and store construction, down 23 percent.  The manufacturing plant category year-to-date increased 19 percent.

Residential building in November was $327.5 billion (annual rate), down 1 percent from October. Single family housing was unchanged from its October pace, staying basically at the plateau that’s been present for much of 2018.  Multifamily housing receded 3 percent in November following its 20 percent rise in October. There were ten multifamily projects valued at $100 million or more that reached groundbreaking in November, compared to 13 such projects in October.  The large multifamily projects in November included the $215 million Victory Park Apartments in Dallas, the $200 million Spring Street North block development in Seattle, and the $160 million multifamily portion of a $190 million mixed-use development in Philadelphia.  The top five metropolitan areas ranked by the dollar amount of multifamily starts in November were – New York, Washington, D.C., Boston, Los Angeles, and Seattle.

During the January-November period of 2018, residential building increased 6 percent compared to last year.  Single family housing advanced 6 percent, showing some deceleration relative to the 9 percent gain reported during the first eleven months of 2017.  By major region, this was the 2018 year-to-date pattern for the dollar amount of single family housing – the West, up 10 percent; the South Atlantic, up 6 percent; the South Central, up 5 percent; the Midwest, up 2 percent; and the Northeast, unchanged from its 2017 amount.  Multifamily housing climbed 8 percent year-to-date, rebounding after the 7 percent decline reported during the first eleven months of 2017.  Through the first eleven months of 2018, the top five metropolitan areas ranked by the dollar amount of multifamily starts, with their percent change from a year ago, were – New York, up 3 percent; Boston, up 80 percent; Washington, DC.., up 28 percent; Miami, up 46 percent; and Seattle, up 29 percent.  Metropolitan areas ranked 6 through 10 were – Los Angeles, down 25 percent; San Francisco, up 20 percent; Dallas-Ft. Worth, up 33 percent; Atlanta, down 17 percent; and Philadelphia, unchanged from its 2017 amount.

Nonbuilding construction in November was $182.0 billion (annual rate), down 2 percent from October.  The public works categories as a group retreated 27 percent after rising 12 percent over the previous three months.  Highway and bridge construction fell 33 percent following a 28 percent hike in October that featured the start of the $1.3 billion U.S. portion of the Gordie Howe International Bridge connecting Detroit and Windsor, Ontario, as well as the $802 million I-395 project in Miami.  The largest highway and bridge projects entered as November starts were the $274 million replacement of the upper roadways of the Queensboro Bridge in New York and the $231 million reconstruction of I-75 in Troy, Michigan. The miscellaneous public works category, which includes pipelines and rail transit projects, dropped 51 percent from October that included the start of the $2.0 billion Gray Oak oil pipeline which will transport crude oil from the Permian Basin to the Corpus Christi, Texas area.  River/harbor development also weakened in November, sliding 21 percent.  On the plus side for public works, sewer construction climbed 78 percent in November, while water supply construction improved 26 percent with the lift coming from a $320 million water treatment plant in the Denver area.  The nonbuilding construction total in November was supported by a 179 percent jump for the electric utility/gas plant category, following a lackluster amount in October.  Large electric utility/gas plant projects that were entered as November construction starts were a $3.0 billion liquefied natural gas export terminal in the Corpus Christi-area and a $1.5 billion expansion of a natural gas liquids fractionators plant in the Houston area.

During the first eleven months of 2018, nonbuilding construction was down 3 percent from the same period a year ago.  The downward pull came from the 30 percent year-to-date plunge for the electric utility/gas plant category, which is on track for the third substantial yearly decline in a row after the exceptionally strong amount reported back in 2015.  The public works categories as a group were able to register a 2 percent year-to-date gain.  Highway and bridge construction increased 9 percent year-to-date, exceeding the 8 percent advance reported during the first eleven months of 2017.  The top five states ranked by the dollar amount of highway and bridge construction starts during this year’s January-November period, with their percent change from a year ago, were – Texas, up 42 percent; California, up 40 percent; Florida, up 11 percent; New York, up 5 percent; and Pennsylvania, up 5 percent.

The 1 percent increase for total construction starts at the national level during the first eleven months of 2018 was the result of a mixed performance by geography.  Four of the five major regions were able to post year-to-date gains – the South Central, up 12 percent; the Midwest and South Atlantic, each up 3 percent; and the West, up 2 percent.  The Northeast was the one major region to post a year-to-date decline, falling 16 percent, which reflected the comparison to a very strong amount during the first eleven months of 2017 that included such construction starts as the $7.6 billion LaGuardia Airport project in Queens NY, a $5.8 billion ethane cracker facility in Monaca, Pennsylvania, and the $1.7 billion 50 Hudson Yards office tower in New York.