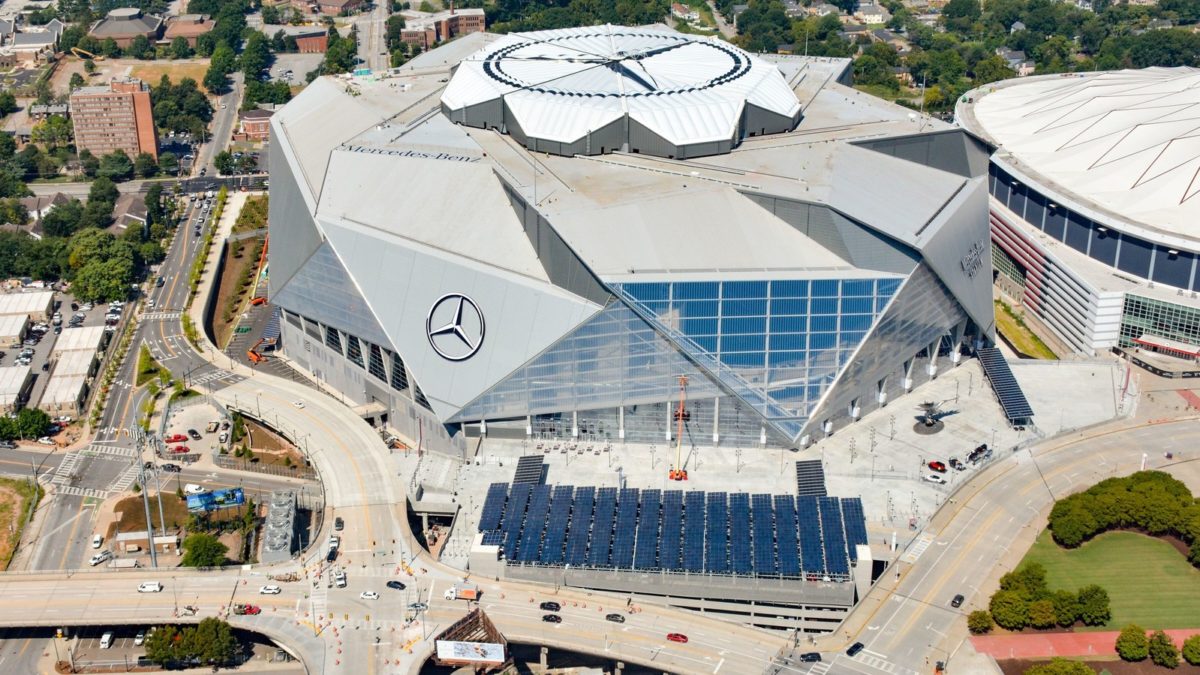 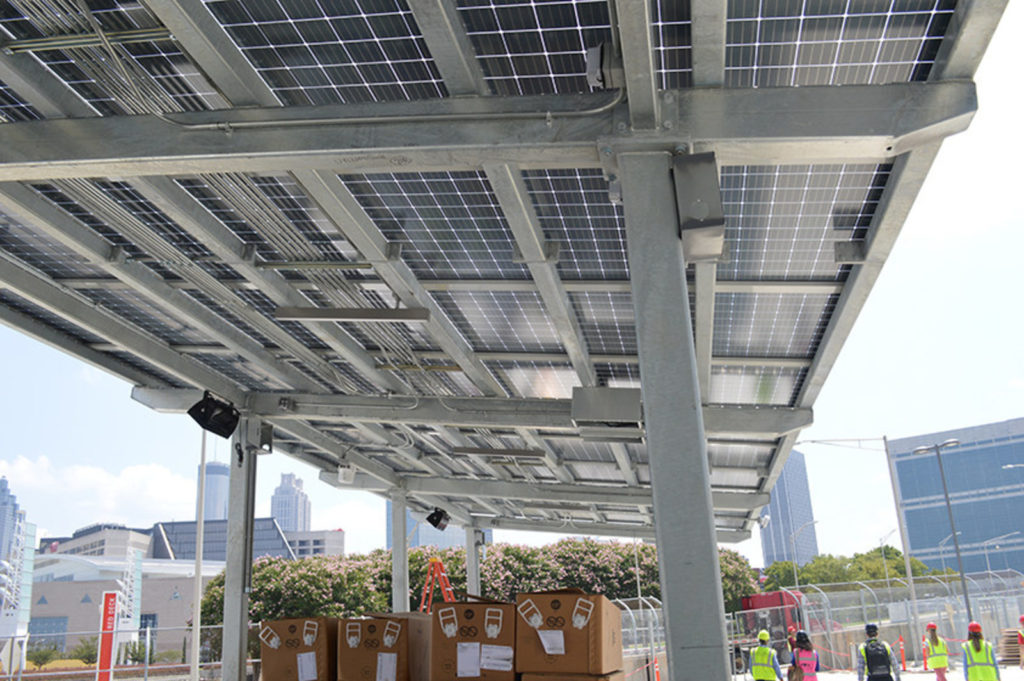 More than 4,000 solar panels installed by Georgia Power across the Mercedes-Benz Stadium campus will harness the power of the sun to produce renewable energy. As the official energy partner of the Atlanta Falcons and a founding partner of Mercedes-Benz Stadium, Georgia Power worked on the solar installations as part of the stadium’s larger sustainability efforts. The solar installations are among the largest and most advanced integrated solar facilities at any American sports venue. 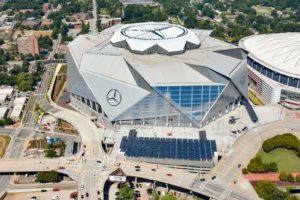 Georgia Power started work with Mercedes-Benz Stadium in 2014 to integrate efficiency and sustainability measures onto the campus. The solar project includes three separate phases that, combined, are expected to generate approximately 1.6 million kilowatt-hours of electricity in the first year of operation. Solar panels are installed atop the Georgia World Congress Center (GWCC) Silver Deck, a GWCC surface parking lot at the corner of Gray Street and Ivan Allen Jr. Blvd., and atop stadium entry gates and administrative/VIP parking.

“Georgia Power continues to be a leader in energy innovation, including expanding cost-effective solar generation across our portfolio, paired with forward-looking research and development efforts,” said Wilson Mallard, Director of Renewable Development at Georgia Power. “As we build the future of energy, our partnership with Mercedes-Benz Stadium helps to educate and illustrate the growing role of solar as part of a diverse energy mix for millions of stadium guests every year.”

Georgia Power worked with a variety of local companies and installers to complete the three phases of the project, which were developed over the course of three and a half years. Local solar installers Hannah Solar and Radiance Energy worked with Georgia Power and Mercedes-Benz Stadium on incorporating innovative technologies and installation solutions to maximize efficiency at each site. The solar installations feature a variety of technologies, including bifacial panels that can capture sunlight from above and reflected from below, clear-backed panels that are translucent, as well as a modular racking system developed through a partnership with Georgia Tech.

The Mercedes-Benz Stadium project and other Georgia Power solar programs that are making the state a solar leader were developed in coordination with and approved by the Georgia Public Service Commission (PSC). The stadium will use the Renewable Energy Credits (REC) produced by the solar installations in the project’s pursuit of LEED Platinum certification, however the actual energy from the systems will flow back onto the grid and serve all Georgia Power customers. This approach is designed to allow the stadium to maintain superior levels of reliability, while also incorporating renewable energy into the campus.

“The renewable energy and solar program at Mercedes-Benz Stadium is a great example of our commitment to lead the sports industry in terms of sustainability and environmental responsibility,” said Scott Jenkins, general manager of Mercedes-Benz Stadium. “Our goal is to collect enough renewable energy each year to power more than nine Atlanta Falcons home games and 13 Atlanta United home matches and with the solar program we have in place we feel confident we’ll achieve this and more.”

Georgia Power’s robust renewable development strategy includes innovative customer programs, as well as large-scale initiatives such as the Advanced Solar Initiative and Renewable Energy Development Initiative (REDI) to bring more renewable energy to Georgia. The company continues to have the largest voluntary renewable portfolio in the country and now has approximately 900 megawatt (MW)* of solar capacity in operation, with accelerating growth year over year since 2013.  Through implementation of the new REDI, approved by the Georgia PSC in 2016, as well as other solar projects and programs, the company expects to add up to 1,600 MW of additional renewable capacity by 2021.

To learn more about Georgia Power’s solar programs, including Simple Solar as well as other solar tools and resources for customers, visit www.GeorgiaPower.com/Solar.

* REC Disclaimer: Every MW hour of electricity produced by an eligible solar generation resource creates a Renewable Energy Credit (REC). Georgia Power purchases only the null energy output from some renewable generating facilities that have contracted to sell that energy to Georgia Power. Ownership of the associated RECs is specified in each respective power purchase agreement. The party that owns the RECs retains the right to use them.