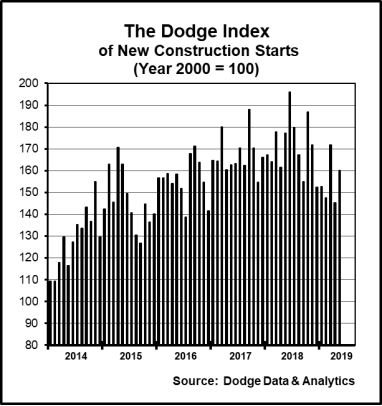 At a seasonally adjusted annual rate of $757 billion, new construction
starts in May climbed 10% from April, according to Dodge Data & Analytics.  The increase continues the double-digit swings that were reported during the previous two months, when a 16% hike for total construction starts in March was followed by a 15% decline in April. Each of the three main construction sectors contributed to May’s 10% gain. Nonbuilding construction rebounded 32% after depressed activity in April, lifted by an especially strong amount of new power plant starts and an $800 million light rail project in the Minneapolis area.  Nonresidential building improved 7%, supported by groundbreaking for two very large manufacturing plant projects. Residential building edged up 2%, with modest gains for both single family housing and multifamily housing. Through the first five months of 2019, total construction starts on an unadjusted basis were $295 billion, down 9% from the same period a year ago. On a 12-month moving total basis, total construction starts for the 12 months ending May 2019 were 2% below the amount reported for the twelve months ending May 2018.

“The presence of very large projects frequently causes volatility in the month-to-month pattern of construction starts, and that’s certainly been the case during March, April, and now May,” stated Robert A. Murray, chief economist for Dodge Data & Analytics.  “Amidst the volatility, the pace of construction starts has on balance been sluggish so far in 2019, as activity has been generally lower than the healthy volume witnessed during the first half of last year.  For public works, there was some dampening in early 2019 arising from the partial government shutdown, although highway and bridge construction has shown improvement in recent months.  For nonresidential building, the boost coming from very large projects so far this year has not been of the same magnitude as what took place last year.  For residential building, multifamily housing has pulled back from last year’s strength, while single-family housing has been essentially flat.  At the same time, there are still positive factors in the current environment affecting construction.  Federal appropriations for fiscal 2019 are in place, and funding support is coming from the state and local bond measures passed in recent years.  Market fundamentals for commercial building and multifamily housing strengthened during 2018 and early 2019, while interest rates remain low. As 2019 proceeds, it’s expected that the shortfall between this year’s level of construction starts compared to last year will narrow.”

Nonbuilding construction in May was $194.4 billion (annual rate), a 32% increase that followed a 33% slide in April. The electric utility/gas plant category surged 552% in May, bouncing back from a very weak April to a volume more than twice the average monthly pace during 2018. This reflected the start of five power plant projects valued each at $200 million or more – a $550 million natural gas-fired power plant in Ohio, the $450 million Emmons-Logan Wind Energy Center in North Dakota, the $300 million Ida Grove Wind Farm in Iowa, the $200 million Southern Oak Solar Energy Center in Georgia, and a $200 million electric substation upgrade in Wyoming.

The public works categories as a group slipped 1% in May, due to a mixed performance by the individual project types. The miscellaneous public works category, which includes such diverse segments as site work, rail transit, and pipelines, increased 20% as the $800 million Metro Green Line Southwest light rail transit in Minnetonka, Minnesota, was included as a May start. Water supply construction rose 23% in May, helped by such projects as the $92 million Oak Ridge Outfall Treatment Facility in Oak Ridge, Tennessee, and an $87 million water reclamation plant upgrade in Valencia, California. On the negative side, highway and bridge construction eased back 2% in May following 8% improvement over the previous two months. The top five states in terms of the dollar amount of highway and bridge construction starts in May were California, Texas, Illinois, New York and Florida. The river/harbor development category dropped 22% in May, while sewer construction retreated 24% even with the start  of $118 million wastewater pumping station upgrade in Honolulu.

Nonresidential building in May was $266.6 billion (annual rate), up 7% following a  16% drop in April. The manufacturing plant category provided much of the lift, soaring 350% as two very large manufacturing plant projects were included as May construction starts – the $1.6 billion Shintech polyvinyl chloride manufacturing facility in Plaquemine, Louisiana, and a $600 million steel mill expansion in Osceola, Arkansas. The commercial categories as a group receded 5% in May, the result of a slower pace for office construction, down 17%; and commercial garages, down 26%.  Even with the decline, office construction in May did include the start of several noteworthy projects, such as the $263 million George H.W. Bush office building in Austin, a $258 million office tower in Nashville, and a $250 million office/research development building in South San Francisco.  Two large data center projects also reached groundbreaking in May – a $150 million Microsoft data center in Goodyear, Arizona, and the $135 million Raging Wire data center in Ashburn, Virginia. On the plus side, warehouse
construction in May jumped 39%, helped by groundbreaking for a $182 million
distribution center in the Bronx, New York, and the $155 million TJX Home Goods
distribution center in Lordstown, Ohio. Hotel construction in May grew 9%, featuring the start of the $305 million hotel portion of the $700 million Philadelphia Live Casino and Hotel in Philadelphia. Store construction, while remaining at a subdued volume, grew 4% in May.

The institutional building categories as a group settled back 2% in May. Educational facilities, the largest nonresidential building category by dollar volume, slipped 1% in May, although the latest month did include groundbreaking for the $205 million Wellesley College science center renovation in Wellesley, Massachusetts, and a $150 million museum renovation at the University of Michigan in Ann Arbor, Michigan. The public buildings category (courthouses and detention facilities) dropped 3% in May, and transportation terminal work fell 63% from April that included the start of the $972 million terminal building portion of the $1.3 billion new airport terminal project at Kansas City International Airport. At the same time, healthcare facilities strengthened 27% in May, reflecting the start of the $500 million MetroHealth Hospital facility in Cleveland, Ohio, the $331 million University of Texas Southwest Medical Center Brain and Cancer Center building in Dallas, and a $182 million hospital tower in Turnersville, New Jersey.  Amusement-related work jumped 54% in May, led by the $237 million casino portion of the Philadelphia Live Casino and Hotel project. The religious building category, while still remaining at a weak volume, increased 19% in May.

Residential building in May was $295.9 billion (annual rate), a 2% gain that marked the first increase after three straight months of decline.  Single-family housing improved 2%, showing some growth after the sluggish performance reported earlier in 2019.  By geography, single family housing registered this pattern during May – the South Atlantic, up 4%, the Midwest, up 2%; the Northeast, up 1%; and the South Central and West, each unchanged from the previous month.  The pace for single-family housing in May was still 7% below the average monthly pace during 2018.  Multifamily housing in May also grew 2%, edging up for the second month in a row after a 12% decline back in March.  There were eight multifamily projects valued each at $100 million or more that reached groundbreaking in May, led by the $653 million multifamily portion of the $850 million One Chicago Square Apartment Towers in Chicago, the $266 million multifamily portion of the $360 million Four Seasons mixed-use hotel/condominium project in Nashville, Tennessee, and a $160 million multifamily high-rise in Jersey City, New Jersey.

The top five metropolitan areas in May, ranked by the dollar amount of multifamily starts that reached groundbreaking, were – New York City, Chicago, Nashville, Tennessee, Washington, D.C , and San Francisco.  The pace for multifamily housing in May was still 17% below the average monthly pace during 2018.

The 9% decline for total construction starts on an unadjusted basis during the first five months of 2018 was the result of decreased activity for each of the three main sectors.  Nonresidential building settled back 3% year-to-date, with 8% declines for both institutional building and manufacturing building that were partially offset by a 3% gain for commercial building.  Nonbuilding construction dropped 11% year-to-date, as a 24% plunge for public works was countered by a 128% jump by electric utilities/gas plants.  The miscellaneous public works category plummeted 54% year-to-date given the comparison to a strong first five months of 2018 that included several large pipeline projects.  If the miscellaneous public works category is excluded, public works during the first five months of 2019 would be down a more moderate 7%.  Residential building year-to-date
dropped 12%, with single family housing down 9% and multifamily housing down
19%.  By geography, total construction starts during the January-May
period of 2019 showed this behavior compared to last year – the South Central,
down 1%; the Northeast, down 5%; the Midwest, down 8%; the South Atlantic, down 12%; and the West, down 15%.

Additional insight is made possible by looking at twelve-month moving totals, in this case the twelve months ending May 2019 versus the twelve months ending May 2018.  On this basis, total construction starts were down 2% from the previous period.  By major sector, nonresidential building increased 4%, with manufacturing building up 21%, commercial building up 8%, and institutional building down 3%.  Residential building dropped 2%, with single-family housing down 2% and multifamily housing down 1%. Nonbuilding construction fell 10%, with public works down 14% while electric utilities/gas plants increased 16%.