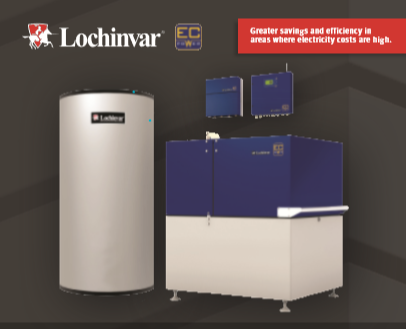 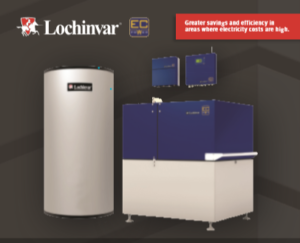 Lochinvar, an industry-leader in high-efficiency boiler and water heater manufacturing, and EC POWER, the top European producer of residential and commercial combined heat and power products, launched in January the XRGI25, one of the most cutting-edge cogeneration products to ever be released in North America. Lochinvar originally announced the strategic partnership with EC POWER in April 2018.

Using an internal combustion natural gas engine, Micro CHP (< 50 kW/hr), is designed to be an efficient and easy-to-install system intended for light commercial use. Using natural gas as a fuel, a commercial facility with a cogeneration system like the XRGI25 can produce both energy-efficient heat for hot water and electricity to reduce energy consumption from external power sources.

“Leading the charge for Micro CHP and cogeneration in North America matches our company vision and almost 80-year legacy perfectly,” said Mike Lahti, vice president of sales, marketing and business development at Lochinvar. “Adopters of Micro CHP/cogeneration can expect the same high-efficiency water heating they have always experienced with Lochinvar while driving additional electricity production. Once this system is installed, customers will see a significant return on investment.”

Exceeding European Union highest efficiency ratings, the XRGI25 avoids the transmission and distribution (T&D) losses that occur when electricity travels over power lines. The current T&D loss in the United States is now about 4.5 percent, but can easily increase to 10 percent when the grid is burdened and air temperatures are high. This product can achieve efficiencies approaching 90 percent.

Micro CHP is designed for areas where the “spark spread,” difference between the cost of electricity and natural gas to produce that electricity, is wide and there is a significant hot water load for an extended period of time.

Designed for many light commercial applications and facilities like multi-family, hotels, hospitals, colleges, restaurants and swimming pools, the XRGI25 aims to meet the growing need for enhanced efficiency and reduced energy waste in North America.

Cogeneration is already making a splash in Europe where a large percentage of electric generation capacity comes from cogeneration. EC POWER has over 10,000 XRGI25 Micro CHP units already installed.