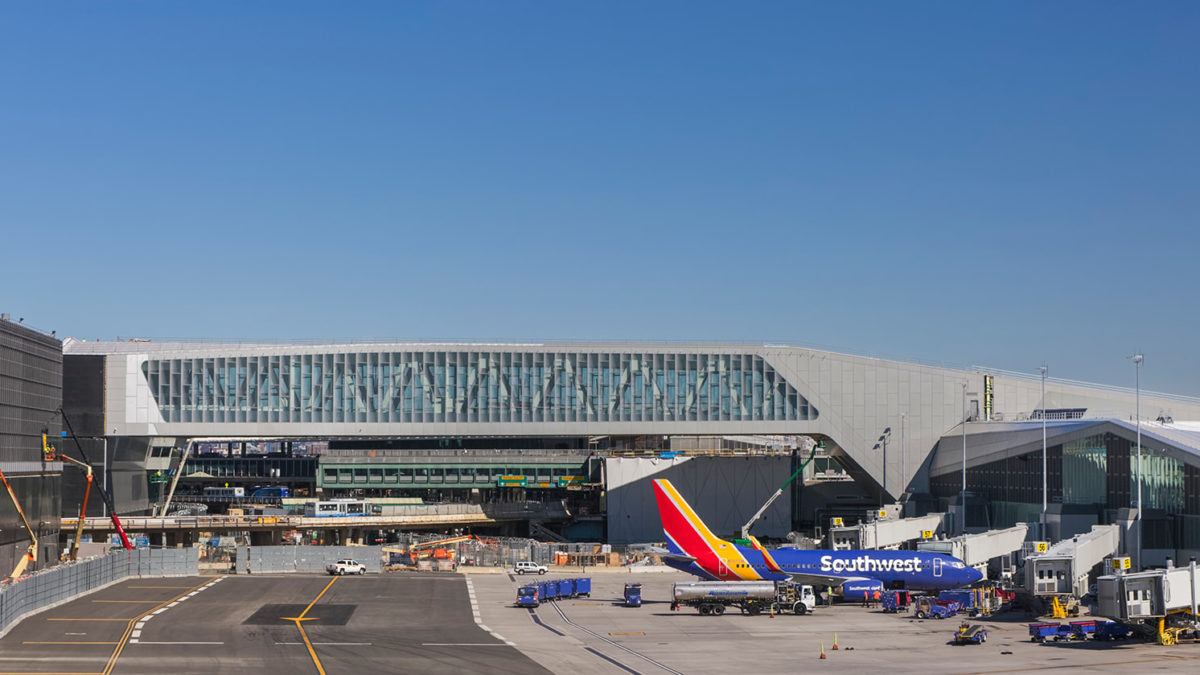 LaGuardia Gateway Partners (LGP), the private entity operating and redeveloping LaGuardia Airport’s Terminal B, announced a June 13 opening date of the state-of-the-art Terminal B Arrivals and Departures Hall, marking the largest milestone in the redevelopment project and signifying that the Terminal B project is approximately 80 percent complete.

The Arrivals and Departures Hall for the new Terminal B is where passengers will check-in, pass through security, experience best in class shops, restaurants and services, and pick up their checked baggage. Air Canada, American Airlines, Southwest Airlines, and United Airlines will operate all their ticket counters and bag claims from the new hall. The building connects directly to the new eastern concourse gates via a pedestrian bridge built over top of the original terminal – a truly innovative design incorporated in the new terminal to ensure that the original facility remained operational throughout construction.

Work is continuing on the final piece of the new Terminal B – the western concourse – which will open its first seven (of 17) gates later in 2020. The new Terminal B signals the start of a modern era in New York City infrastructure and aviation and is part of Gov. Andrew Cuomo’s vision for a state of the art unified airport. Once the overall LaGuardia redevelopment is complete, the United States will have its first new airport in more than two decades.

“The opening of the new Arrivals and Departures Hall at Terminal B is the biggest milestone to date in the transformation of LaGuardia Airport into a world-class transportation hub that is worthy of New York State,” Gov. Cuomo said. “As we continue to upgrade and modernize this airport for the 21st century, this new state-of-the-art hall will offer passengers a unique travel experience with new concessions, traveler amenities and art installations by four of the world’s leading artists, while increasing space for passengers to move more safely and efficiently during and after the COVID-19 pandemic.”

The Arrivals and Departures Hall is an immense 850,000 square feet and includes four levels for passengers. The design incorporates soaring ceilings and an abundance of natural light, creating a comfortable and welcoming ambience for passengers. The top level features the main commercial district, including 17 of the hall’s 21 modern shops and restaurants (due to COVID-19, not all shops and restaurants will open initially).

LGP has also partnered with the TSA to ensure Terminal B features the most technologically advanced screening equipment, including Advanced Imaging Technology, Smart Pad System and mobile inspection tables as part of the baggage system. Other innovative technologies in the terminal include our common use check-in system, dynamic signage, the terminal’s Building Management System and mobile and contactless food ordering.

In July 2015, Governor Cuomo unveiled the vision for a comprehensive redevelopment of LaGuardia Airport, which included the new 1.3 million square foot Terminal B. With a construction value of $4B, the Terminal B project is one of the largest public-private partnerships in American history and the largest in US aviation. The Terminal B redevelopment includes a new 35-gate terminal, a parking garage, and a Central Hall, which will unify the airport by connecting to Terminal C, which is also being redeveloped.