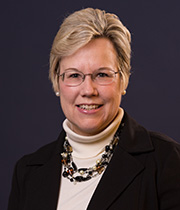 Katharine “Kathie” Morgan has been named president of ASTM International, one of the world’s largest standards development organizations. Morgan will lead a team that supports thousands of members, customers, partners, and other stakeholders worldwide. She succeeds James A. Thomas, who served in the role for 25 years.

“I am thrilled and humbled to serve as president of an organization that has played such a foundational role in meeting societal needs for over a century,” Morgan said today at the organization’s first major meeting of 2017 in Norfolk, Va.  “We will build on the legacy of Jim Thomas, attracting even more of the world’s top technical expertsto our committees while also serving people and organizations that rely on our standards and services.”

Morgan is one of the world’s most prominent voices on standardization-related issues. She is a board member of the American National Standards Institute’s Board of Directors, the Council of Engineering and Scientific Executives, the International Consumer Product Health and Safety Organization, the Society for Standards Professionals (SES), the American Society of Association Executives, and a former member of the Standards Council of Canada’s Standards Development Organization Advisory Committee.

Morgan holds a bachelor’s degree in chemical engineering from Lafayette College in Easton, Pa., and a master’s degree in business administration from Widener University in Chester, Pa. Follow her on Twitter at @ASTMpres.