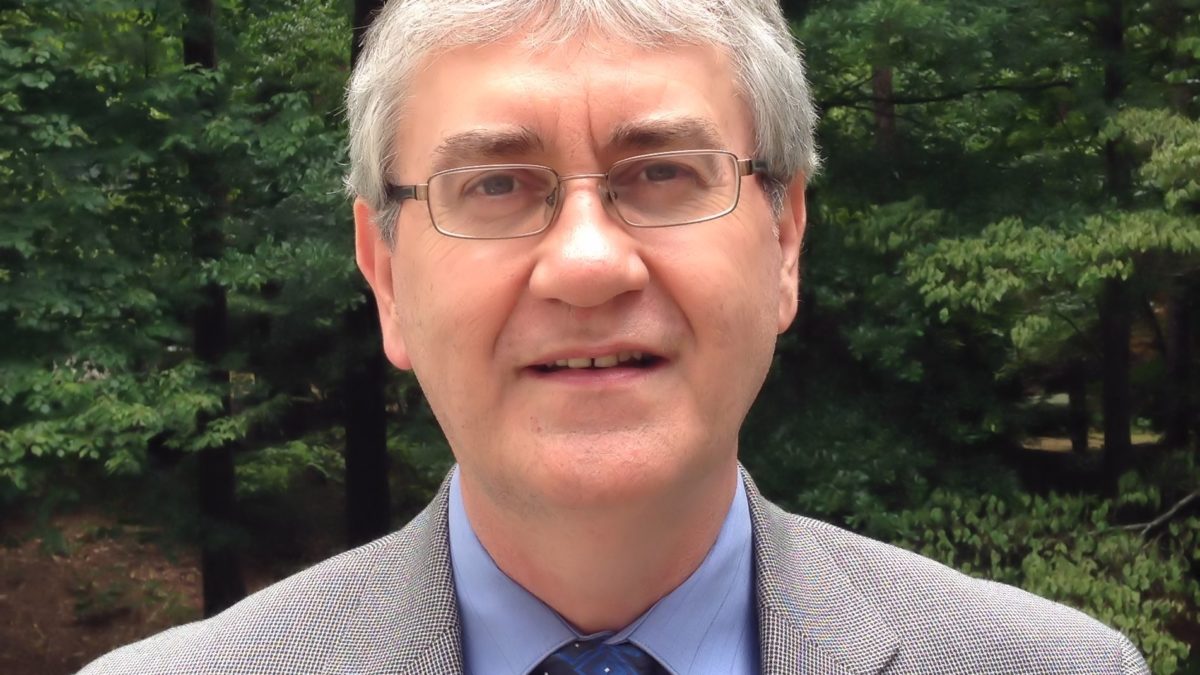 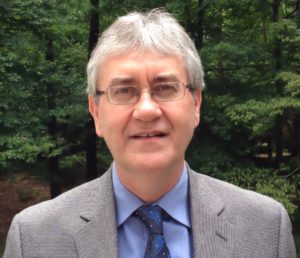 John McGee followed an unusual trajectory to becoming the IFMA Chairman of the Board—he actually joined IFMA for the first time as he was brought on to the Board of Directors in 2005. Since that very moment, he eagerly embraced every opportunity where he could apply his “built-environment” strategic, leadership, technical, operational and business skills gained from corporations both in the U.S. and internationally. He consciously applied and levered his experience, intuition and educational background to advance IFMA and the profession.

“At the same time, I feel I gain more from IFMA than the reverse as it has been a continuous real-time experience of learning about and serving a member-centric organization,” McGee explains. Between 2005 and 2008, he was a director who was then appointed second vice chair, then first vice chair, and served as IFMA Chairman in 2008-2009.

McGee helped to put the “International” in IFMA in the mid-2000s, as the native of Ireland infused his European and American corporate perspectives into the many decisions the Board of Directors made to help facilities managers elevate themselves by gaining wider recognition for their services to their partner corporations and institutions. While on the Board, McGee had duties on the Audit Committee and served as an IFMA Foundation Trustee; participated on and led the Strategic Plan Oversight Committee; and led a Board-appointed International Task Force. While he was Immediate Past Chair in 2009-2010, he served on the Blue Ribbon Task Force commission to identify, evaluate, and recommend the new IFMA President/CEO, which resulted in present leader Tony Keane. He also represented IFMA on the board of Global FM.

Not one to step away from the action, he served as a member of the IFMA Sustainability Committee from 2010 to 2012 where he applied his analytical and strategy skills to help shape and craft IFMA’s initial sustainability policy, and served as lead author on the how-to guide: “US Government Policy Impacts and Opportunities for Facility Management” that achieved over 1100 PDF downloads within first month of publication. 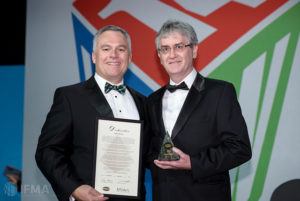 “If I am asked for anything to do with IFMA, I will always try to be available and do what I can to support,” declares McGee. For example, one of his IFMA colleagues and friends, Eric Teicholz, (who recently served on the Board of Directors and has guided IFMA’s sustainability efforts in recent years), reached out, and McGee is now providing support to the recently revamped Sustainability Committee.”

McGee does not possess a traditional facility manager in practice background, but he held a series of executive positions in Ireland and Germany with ABB and Johnson Controls, Inc. For Johnson Controls, he led its European production and materials management functions charged with bringing them up to world-class standards between 1992 and 1996. His success in Europe was transferred to the U.S. in 1996 when Johnson Controls promoted him to its Milwaukee headquarters to focus on a variety of areas including functional responsibilities in manufacturing and OEM & wholesaler sales. He also led programs and initiatives in strategic planning, customer satisfaction, quality (including Six Sigma and ISO 9000 initiatives), and change-management programs.

The influence of an executive career

Between 1992 and 2001, McGee’s career continued with Johnson Controls, Inc. when he transferred to Atlanta, Georgia to take the position of Vice President of Operations for the Integrated Facility Management division. In this role he had full P&L responsibility for the delivery of services through more than 1000 facility management professionals.

From 2001 to 2005, he worked as Senior VP with EMCOR Facilities Services. This was a facility management centered position that provided the leadership that focused on differentiating the division by building an industry-leading technology platform and a suite of knowledge-based services. Specifically, McGee led the development of EMCOR’s knowledge center in Phoenix, Arizona, technology platforms, web-based learning services, facility-services related sourcing and procurement, quality and business process management.

Interestingly, at the time when he was not directly involved with IFMA himself, both his employers, Johnson Controls, Inc., and EMCOR, were Corporate Sustaining Partners of IFMA.

For a period, McGee moved away from a Facility Management role when he moved to Union Switch & Signal (US&S) in Pittsburgh as its COO. The company is focused on the global rail and transportation sector. The core responsibilities were in the areas of hardware and software development, project management and solution delivery. However, experience gained there was foundational to later responsibilities focused on software solutions that manage energy in commercial buildings.

Consulting, not retiring, while serving as Chair

After the global division that US&S was part of, went public, McGee considered retirement. This coincided with McGee becoming Chairman of IFMA’s board so he continued to provide extensive support to IFMA. At the same time, he provided consulting support to a number of companies. For example, for the President of GoodCents (an energy services company, headquartered in Atlanta, Georgia) he led and co-led projects in service product development, sales, marketing, business intelligence, I.T., field operations, quality and reporting that supported unprecedented sales growth in 18 months. This role supported advancing the company’s ability to cost-effectively deploy utility-based programs to improve the energy efficiency of buildings.

The experience at GoodCents encouraged McGee to focus his skills on energy management in commercial buildings and industrial facilities. First as COO at Ice Energy – a provider of thermal storage solutions for commercial buildings and then as CTO with Viridity Energy – a provider of a software platform and solutions that manages the total energy spend in buildings including the interaction between supply and demand-side costs and consumption.

Viridity Energy’s VPower platform advises facility managers on how to minimize the net cost of energy in commercial building(s) that are under their responsibility and the accompanying advisory dashboards and functionality then allows them to control the energy consumed by the building assets—either manually or automatically through installed building management systems. This allows the facility manager to significantly impact the company’s bottom-line and, at the same time, advances the company’s sustainability goals.

While McGee worked for companies in various regions of the U.S, he was always able to maintain his residence in a suburb of Atlanta, Georgia. This worked well for his wife Joan, who is seen regularly accompanying John to World Workplace and other significant IFMA programs, and for his sons, Sean and Ronan, while they pursued their education.

McGee’s education reflects his travels with technical and business degrees and professional qualifications from the U.S., U.K. and Ireland.

In summary, service to IFMA was not viewed as a business opportunity for McGee, but a chance to use all his business experience and credentials to impact the profession at a time when IFMA was critically focused on elevating the facility management professional and enhancing the development of its members. “IFMA is central to the career-development of its members,” says McGee. “And for those entering the facilities profession, it offers a people-centered community that is continuously available as they travel that journey.”

McGee also refers to himself as “a Fellow on call.”  McGee has been and continues to be an advisor to many professionals in their journey to FM fulfillment. He swears he will be there to encourage IFMA members who are getting their certifications or to provide career advice as they climb the FM career ladder.

For McGee, who was designated an IFMA Fellow in October 2014, it means . . . “acceptance by an elite group of professionals that represents the pinnacle of the FM global industry, and IFMA—its leading organization. My selection results in both an opportunity to be part of an ongoing FM contribution that leverages Fellows’ knowledge, capabilities and expertise gained over many years and across many disciplines and to be part of bringing that collective competency to the young professional, to the mature practitioner, to the global profession and to IFMA.”

To McGee, his Fellowship provides the opportunity to contribute to the development and delivery of new knowledge to the profession and to the ongoing building of the Fellows’ legacy that future generations will look to with pride. “I will apply the skills gained from being a participant in the built environment for more than 20 years to advance the strategic, operational, and commercial contribution of FM practitioners in the businesses that they serve,” he declares.

“If I were not recognized as a Fellow, it would not change my commitment to IFMA. When I reflect on World Workplace Dallas (2008), it was clear to me that Fellows were the heart and soul of IFMA in terms of dedication, commitment, and ongoing service,” McGee reflects. “I never pushed for it or looked for it, but if considered, I knew I would be thrilled,” says McGee.

Regarding his election to being a Fellow, McGee has a piece of advice for future Fellow candidates. “The sponsor part is a critical enabler to becoming an IFMA Fellow,” says McGee. “Tom Mitchell (CFM, IFMA Fellow, Managing Principal/Founder, TLM Facility Management Services, and former IFMA Chairman with whom McGee served on the Board) was my coach and sponsor.”

In 2014 McGee declared, “I learned more and got more from IFMA than I could ever give. Eventually, I hope to sponsor someone on their journey to becoming an IFMA Fellow.” And in 2015, he got his wish when he successfully sponsored Marc Liciardello to be elected a Fellow in 2015.