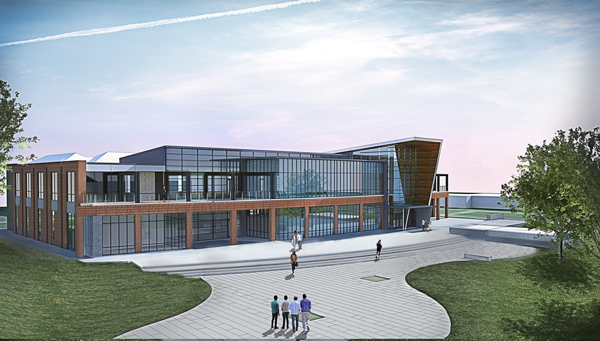 “We see this new facility as an information beacon on a hill,” said President Rick Gallot of Grambling State. “We are grateful to the students, University of Louisiana System, the Board of Regents, our Governor and the legislators who are collaborating to make this vision a reality for our campus.”

The University will pursue a designation of the first digital library housed at a Historically Black College and University in the United States.

“We are honored to help Grambling State lead new innovation for its students, HBCUs and the Louisiana community,” said Denelle Wrightson, a library and design consultant who has helped lead site planning and design since the idea was born in 2017.

“Grambling State has a long history of producing business and industry leaders who have shaped Louisiana and the nation,” said Dr. Jim Henderson, University of Louisiana System president. “It’s important, and an honor, to be a part of developing this University’s next generation of leaders and supporting necessary improvements including the new digital library.”

The fast-moving digital library project began in 2017, when President Gallot petitioned for the closure and support to replace the University’s existing facility, the A.C. Lewis Memorial Library, which was constructed in 1962. President Gallot, alumni, faculty, and ULS leadership partnered with students quickly to garner both funding and commitments to make a new facility a reality.

“The commitment of our state legislature is demonstrated by the swift and prompt action on this critical capital outlay need,” said President Gallot. “We are fortunate to have a System and community who truly support us and help us ensure our students remain and know they are our top priority.”

In under 20 months, the University’s proposal has moved from initial research to funding and design approval. The State of Louisiana’s Capital outlay plan projects the $16.6 million project to complete in the Winter of 2020.

In January 2019, Grambling State University brought on its first Dean of the Digital Library and Learning Commons, Adrienne C. Webber. Webber brings to the University 29 years of professional experience with more than 21 years of expertise managing library and information innovation.

Most recently, Dean of Library Services at University of Maryland Eastern Shore, Webber has served at schools including South Carolina State University, Xavier University, Alabama A&M University and Texas College face the challenges of innovating as the information space changes. She has also served as an archivist for Atlanta Olympic Broadcasting (AOB) and the Atlanta Committee for the Olympic Games.

“Our team will work to ensure this new facility will provide limitless access to the information and education that prepares students to thrive in the growing information economy,” said Dean Webber. “It’s an honor to work with President Gallot and this University’s rich history as Grambling State steps the nation forward once again.”

The Digital Library is one of a number of construction projects underway at the University. Other campus improvement efforts include: