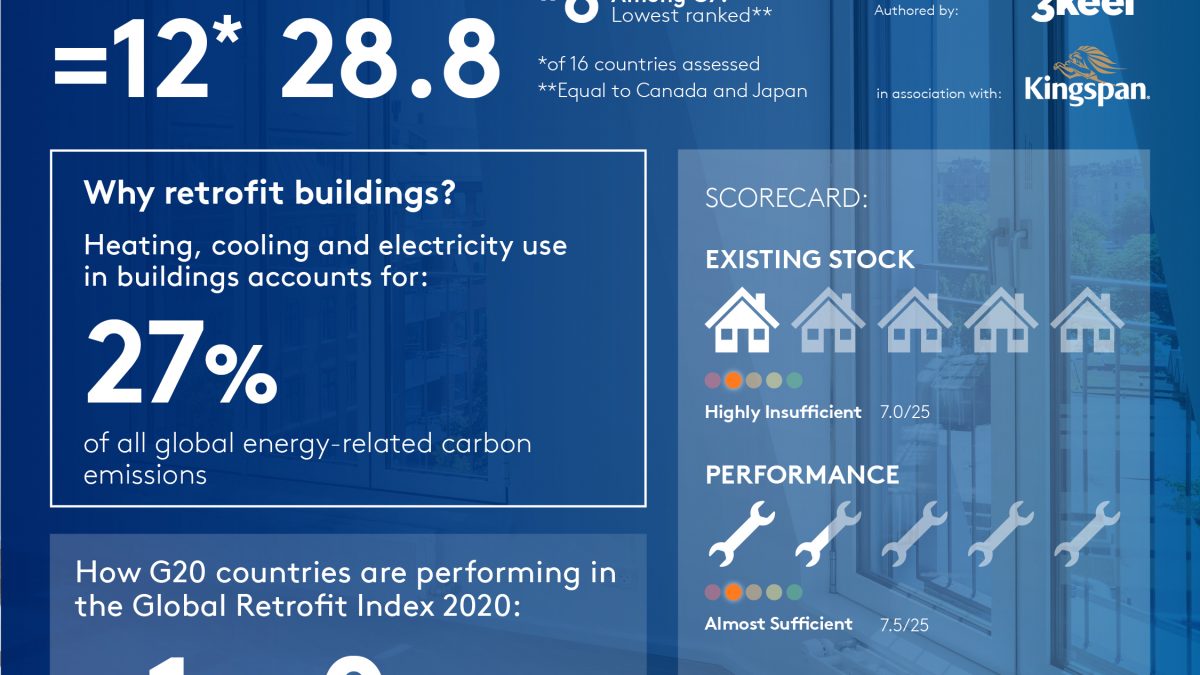 The Global Retrofit Index developed by 3Keel assesses the progress G20 countries are making to reduce emissions from existing buildings. In developed economies 80% of the buildings that will be standing in 2050 have already been built, meaning that policymakers have to get to grips with the challenge of making the existing global building stock fit for the future.

Less than 1% of existing buildings in major economies are being given the necessary retrofitting upgrade — through energy efficiency renovations and refurbishments — each year. This is well below the International Energy Agency (IEA) target of 2.5% rate by 2030.

The report evaluates the current need for building retrofits, recent progress, and policy commitments in G20 countries and the G7 economies.

3Keel’s research revealed that among G20 nations, Germany leads the way in its retrofitting performance, followed by France. Nevertheless, even these higher performing countries are not making sufficient progress to reduce emissions in line with global net-zero targets. Among the G7 members, Canada, USA and Japan ranked lowest.

* Two EU countries were included in the study due to notable retrofits policy: Netherlands and Croatia

** 3Keel was not able to fully assess G20 members Argentina, India, Russia, South Africa, and Indonesia due to a lack of publicly available information on their building sector and/or retrofit policies.

The study concludes that while many G20 countries have achieved some reduction in building-related emissions, they are all failing to do so at the speed and scale required to achieve the 2050 net-zero goals agreed at COP 21 under the Paris Agreements. To get back on track, the sector’s energy intensity must drop five times quicker over the next decade than it did between 2015 and 2020.  This will mean achieving a 50% cut in direct emissions and 60% cut in indirect emissions by 2030.

According to the International Energy Agency (IEA), deep energy retrofits of buildings can reduce energy demand linked to heating by two-thirds or more. Retrofitting 20% of buildings in advanced economies over the next five years would reduce CO2 emissions from heating by around one-fifth, says the IEA.

The global energy crisis and supply shortages resulting in soaring energy bills are focusing minds on the benefits of energy efficiency like never before, but the cost-of-living crisis presents challenges to householders and businesses who may not be able to afford the necessary improvements without government support. Major energy savings can be achieved through established technologies such as by improving insulation and installing heat pumps.

We developed the global retrofit index to benchmark the progress made by different countries in reducing emissions from their building stock. Our findings clearly show that we urgently need to significantly increase the retrofit rate globally and ambitious government action will be vital to support the building and construction sector.

To achieve the level of reduction needed, the energy performance of existing building stock will need to be significantly improved and deep energy retrofits needed to achieve the deep cut in emissions we must make. In countries with older building stocks, the need for retrofits will be even greater.

Decarbonizing the built environment is a critical issue that must be addressed to help limit the global temperature rise to 1.5⁰C by the end of this century. We need to consume less energy and fewer resources. Rapidly reducing the energy used to heat, cool and power buildings is an essential part of the puzzle and should be one of the planet’s most urgent climate policy goals.

We have the tools, solutions and technologies needed to improve energy performance in buildings. We now need to apply these at scale. We must work together locally and globally to increase the pace of building refurbishments. That means finding innovative models for funding, supporting policy changes, minimizing disruption for the public and ensuring high levels of energy savings over the lifetime of the retrofitted buildings.

This isn’t just the problem of world leaders and Governments. The onus is on all of us across the built environment value chain to engage positively and proactively.

The Global Retrofit Index is available to download at 3Keel.