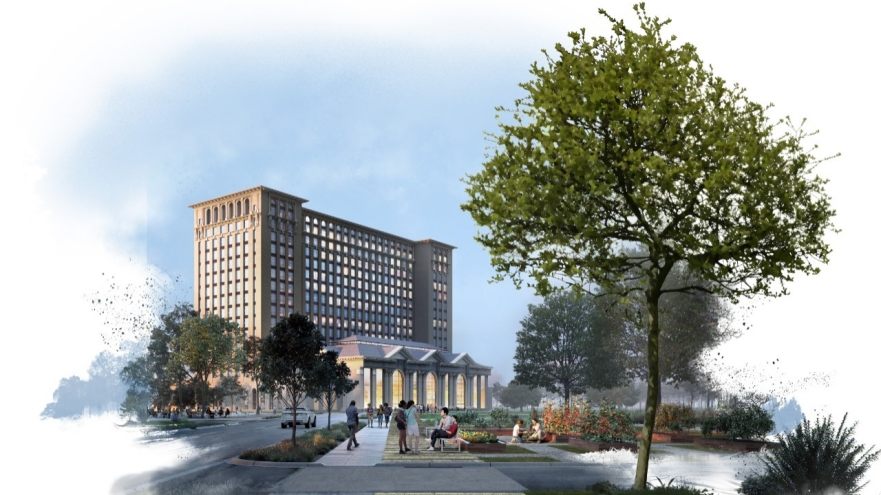 Ford has commissioned Norwegian firm Snøhetta as the design leader to re-envision its Headquarters and Research Campus in Dearborn, Michigan, as well as its new urban campus in Detroit’s Corktown neighborhood. Snøhetta has offices in New York, San Francisco, Innsbruck, Austria and Oslo. Ford’s new Corktown campus will be a hub where it will work with its partners on autonomous and electric vehicles, and design urban mobility services and solutions that includes smart, connected vehicles, roads, parking and public transit.

Ford recently announced the acquisition of Michigan Central Station, an iconic former train station and the city’s 18-story Beaux-Arts Classical landmark. The Detroit complex will be outfitted within Michigan Central Station. The restoration plan will include the opening of mixed-use amenities across the first-floor concourse including dining and retail. The 500,000-square-foot structure will be rounded out with offices for Ford and its partner companies. The entire Corktown Campus is expected to total 1.2 million square feet.

“Michigan Central Station is a place that in many ways tells the story of Detroit over the past century,” according to Bill Ford, the company’s executive chairman. “We at Ford want to help write the next chapter, working together in Corktown with the best startups, the smartest talent, and the thinkers, engineers and problem-solvers who see things differently – all to shape the future of mobility and transportation.”

The acquisition of Michigan Central Station comes alongside the company’s purchase of the former Detroit Public Schools Book Depository, two acres of vacant land, the site of an old brass factory and the recent purchase of a refurbished former factory in Corktown, now home to Ford’s electric vehicle and autonomous vehicle business teams.

Forecasted to debut in 2022, the Corktown project is currently its early planning stages, while the conceptual design for the Dearborn campus is slated for completion by the end of this year.