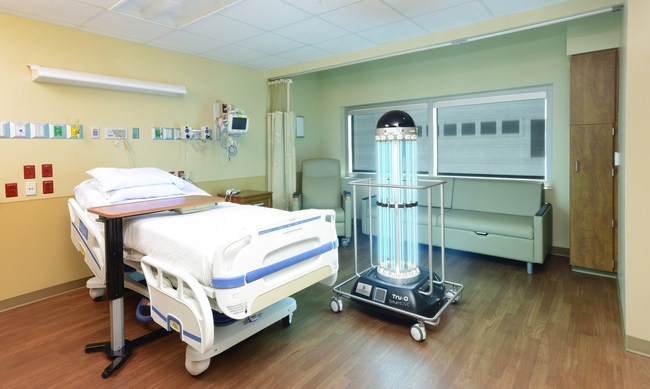 Tru-D is used to disinfect patient rooms, operating rooms and other areas in health care facilities.

Tru-D is used to disinfect patient rooms, operating rooms and other areas in health care facilities.

A new manuscript has been accepted by the Journal of the American College of Surgeons which examines C. diff in adult surgical patients. The paper, “Multidisciplinary Approach and Clostridium difficile Infection in Adult Surgical Patients,” discusses the multidisciplinary program that Duke University Medical Center implemented to reduce its C. diff rate.

In 2017, Duke University Medical Center was identified as a “High Outlier” for postoperative C. diff infections in the American College of Surgeons NSQIP semi-annual report with .4 percent cases per year with an increased risk in morbidity and mortality. To address the issue, “The Department of Surgery initiated a CDI Task Force with representation from Surgery, Infectious Disease, Pharmacy and Performance Services to analyze available data, identify opportunities for improvement and implement strategies to reduce CDI,” the manuscript states. 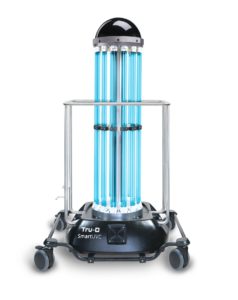 As one of the strategies, “We reviewed the terminal cleaning policies for rooms occupied by patients with known CDI once they were discharged from the hospital,” the authors stated. “Additionally, the success at eliminating C. difficile through the established terminal cleans was verified through an auditing process. However, the audit demonstrated that there was variability and ineffective cleaning practices within the hospital system. These deficiencies were largely due to lack of Environmental Services staff and staff trained in Tru-D technology.”

The conclusion provided a basis for requesting the hiring and training of additional Environmental Services staff and “expanded training for terminal cleans was used for the Tru-D technology system, a system which uses an ultraviolet light cleaning system to denature the spores of C. difficile. This provided more effective terminal cleaning.”

By training five additional Tru-D operators, the facility went from using Tru-D on 30 percent of C. diff rooms to 100 percent of C. diff rooms. “Appropriately trained Tru-D technicians increased in number following the initiative from two in 2017 to seven in 2019. This increase in technicians allowed for an increase in terminal cleans by Tru-D Ultraviolet therapy from 30 percent in March 2017 to 100 percent in September 2018,” the manuscript states.

Validated by multiple studies including the only randomized clinical trial on UVC disinfection, Tru-D has been proven to be a chemical-free and environmentally-friendly way of providing thorough room disinfection. UVC is a type of energy that is invisible to the human eye. Its wavelengths are between 200 and 300 nanometers, making them germicidal – meaning they are capable of inactivating microorganisms, such as bacteria, viruses and protozoa.

“It has been proven that increased utilization of Tru-D and UVC disinfection technology correlates to a reduction in hospital-acquired infections, including C. diff,” Brewer said. “By training additional staff in the operation of Tru-D, Duke was able to achieve 100 percent utilization, which helped to contribute to the 28 percent reduction in C. diff infections.”

For more information on Tru-D’s technology and/or to watch a video on the power of one placement and one cycle, visit tru-dpowerofone.com.