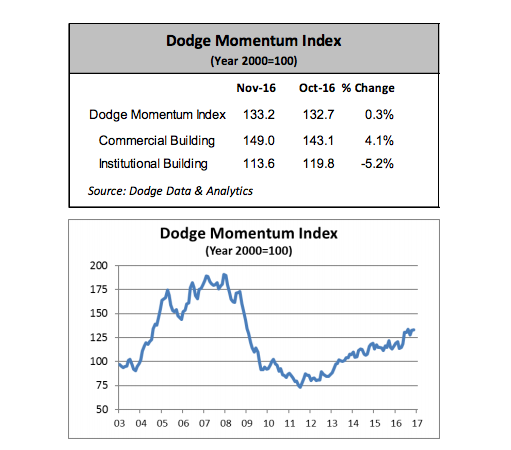 The Dodge Momentum Index moved 0.3% higher in November to 133.2 from its revised October reading of 132.7 (2000=100). The Momentum Index is a monthly measure of the first (or initial) report for nonresidential building projects in planning, which have been shown to lead construction spending for nonresidential buildings by a full year. The overall Momentum Index has now posted increases in 10 of the last 12 months, and stands 18% higher than its November 2015 reading. This suggests that construction activity should continue to strengthen in 2017. The uptick for the Momentum Index in November was due to a 4.1% rise in the commercial building component, while the institutional component slipped 5.2% in the month. Institutional planning had shown strength earlier in 2016, but has since receded, and is now 2% lower than last year. Commercial planning, on the other hand, had a very weak start to the year but has since moved forward and is now 35% above last year. While trending higher over the last year, volatility has been the hallmark of the Momentum Index in 2016, matching the uneven pace of growth in the overall economy. It is likely that the volatility will persist in the months ahead.