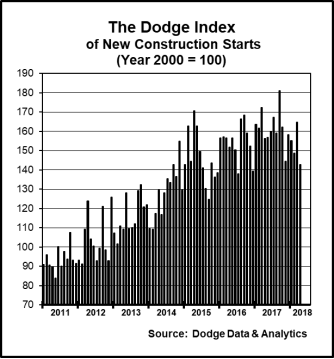 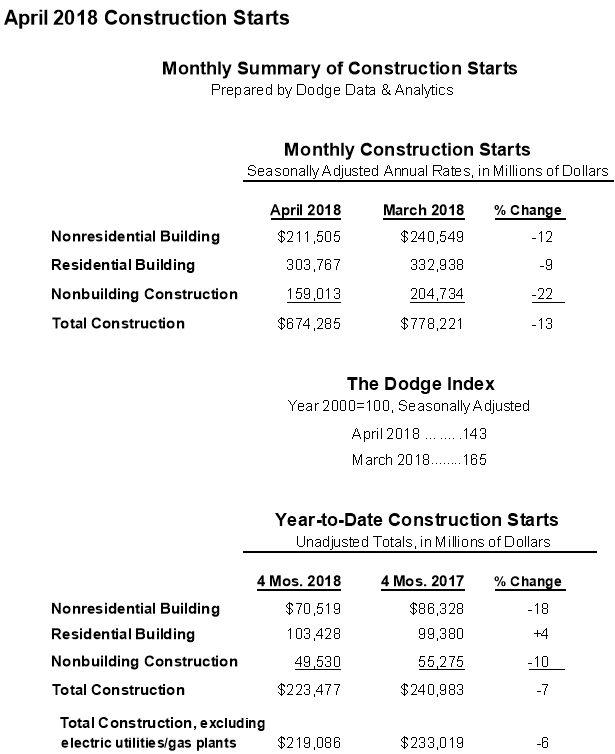 The value of new construction starts in April fell 13 percent from the previous month to a seasonally adjusted annual rate of $674.3 billion, according to Dodge Data & Analytics.  The decline follows the 11 percent gain reported for March, which was the highest level of construction starts over the preceding six months. The loss of momentum in April was widespread, involving each of the three main construction sectors. Nonbuilding construction (public works and electric utilities/gas plants) plunged 22 percent after its 74 percent hike in March that featured the start of the $3.5 billion Mountain Valley Pipeline expansion in West Virginia and Virginia, as well as several large highway projects. Nonresidential building retreated 12 percent due to a slower pace by its institutional and manufacturing segments. Residential building dropped 9 percent with reduced activity for both single family and multifamily housing. During the first four months of 2018, total construction starts on an unadjusted basis were $223.5 billion, down 7 percent from the same period of 2017 (which included very strong amounts for airport terminals and natural gas pipelines). On a twelve-month moving total basis, total construction starts for the twelve months ending April 2018 matched the dollar amount that was reported for the twelve months ending April 2017.

April’s data lowered the Dodge Index to 143 (2000=100), down from a revised 165 for March.  Taking the average for March and April produces an Index reading of 154, slightly above the 152 average for January and February, although still below the 161 average for the full year 2017.

“The construction start statistics can be volatile on a monthly basis, and given the wide swings present in March and April it’s probably best to take the average of the two months in assessing the current health of the construction industry,” stated Robert A. Murray, chief economist for Dodge Data & Analytics. “The average for March and April shows that construction starts so far in 2018 are proceeding slightly behind last year’s average pace.  Even with this modest slowdown in early 2018, there are several factors in the current environment that should help construction activity to stay close to recent levels. Job growth continues to be strong, with the unemployment rate at the lowest level since 2000, which should limit any upward movement by commercial vacancy rates this year.  In its latest quarterly survey of bank lending standards, the Federal Reserve indicated that lending standards for nonresidential building projects eased slightly on net during the first quarter of 2018, following the tightening that took place from late 2015 through 2017. In March, Congress reached agreement on fiscal 2018 appropriations, providing additional funding for several public works programs. And, while interest rates are rising, the upward movement so far has been measured, with the 10-year Treasury bill stabilizing at about 3 percent from March through mid-May.”

Nonbuilding construction in April was $159.0 billion (annual rate), down 22 percent from the robust amount in March. The public works categories as a group dropped 25 percent after soaring 63 percent in March. The miscellaneous public works category, which includes pipelines and mass transit projects, plummeted 45 percent in April after being lifted in March by the $3.5 billion Mountain Valley Pipeline expansion in West Virginia and Virginia. There were two large rail-related projects that were entered as April starts, the $1.2 billion rail portion of a $1.5 billion expansion project for the Long Island Rail Road in Nassau County, N.Y., and the $500 million Union Pacific Brazos railroad yard in Hearne, Texas, but combined they were only about half the dollar amount of the Mountain Valley Pipeline project. Highway and bridge construction in April made a partial 12 percent retreat after surging 29 percent in March due to such projects as the $1.1 billion I-405 highway project in Orange County, Calif., and the $855 million Grand Parkway highway project in Houston. April did include several noteworthy highway and bridge projects entered as construction starts – the $511 million Twin Ship Channel Bridge replacement in Pasadena, Texas, the $410 million I-64 widening and bridge project in Chesapeake, Va., the $291 million bridge portion of the Long Island Rail Road expansion project in Nassau County, N.Y., and a $189 million bridge replacement project in Baltimore.  The environmental public works categories registered a mixed performance in April, with declines for river/harbor development, down 26 percent; and sewer construction, down 9 percent: while water supply construction improved 2 percent.  The electric utility/gas plant category increased 7 percent in April, although the level of activity was still 44 percent below last year’s average monthly pace.  There were four large wind farms entered as construction starts in April, with three located in Iowa valued respectively at $510 million, $224 million, and $107 million, while the fourth was located in Nebraska valued at $304 million.

Nonresidential building in April was $211.5 billion (annual rate), down 12 percent from March.  The institutional side of nonresidential building decreased 12 percent in April, sliding for the second month in a row.  Educational facilities, which is the largest nonresidential building category by dollar amount, fell 13 percent in April after rising 7 percent in March.  The largest educational facility projects entered as April starts were the $200 million Chen Institute for Neuroscience at the California Institute of Technology in Pasadena, Calif., the $181 million renovation of a Health and Human Services research building in Bethesda, Md., a $133 million high school in the Houston area, and a $94 million high school in the Portland area.  Healthcare facilities in April dropped 27 percent, retreating for the second month in a row after a strong February.  The largest healthcare facility project entered as an April start was a $90 million cancer treatment center in Norfolk, Va. Transportation terminal work also declined in April, dropping 16 percent. On the plus side, the public buildings category (courthouses and detention facilities) advanced 34 percent in April, helped by the start of the $175 million Franklin County Corrections Center in Columbus, Ohio. Also increasing in April were religious buildings, up 26 percent; and amusement-related projects, up 3 percent. The manufacturing plant category in April plunged 59 percent following a 282 percent jump in March that included several large natural gas processing facilities. April included the start of a $682 million tire manufacturing plant in Clinton, Mo., but there were no other manufacturing plants valued at $100 million or more entered as April starts.

The commercial building categories as a group provided a relative bright spot for nonresidential building in April, rising 5 percent after a 15 percent decline in March. Office construction rebounded 18 percent after its 18 percent March slide, with the upward push coming from the $480 million addition to the Hudson Commons office building in New York, plus two data center projects in Ashburn, Va., valued respectively at $350 million and $135 million. Store construction grew 21 percent in April, while hotel construction advanced 25 percent. Large hotel projects entered as April starts were the $350 million Marriott Hotel at Bonnet Creek in Orlando, Fla., and the $125 million Hyatt Centric Hotel in Philadelphia. On the negative side, commercial garages fell 37 percent in April and warehouse construction retreated 11 percent after posting a 32 percent gain in March. The warehouse pullback in April was cushioned by the start of three Amazon distribution centers located in Euclid, Ohio, ($175 million), Saint Peters, Missouri, ($75 million), and Macon, Ga. ($70 million).

Residential building in April was $303.8 billion (annual rate), down 9 percent. Multifamily housing declined 20 percent, retreating for the second month in a row following its improved activity during the first two months of this year. April’s volume of multifamily housing was down 7 percent from the average monthly pace reported during 2017. There were four multifamily projects valued each at $100 million or more that reached groundbreaking in April, compared to 13 such projects in March.  The four largest multifamily projects entered as April starts were the $550 million Queens Plaza Park Apartments in Long Island City, N.Y., the $429 million multifamily portion of a $516 million mixed-use development in Seattle, and two multifamily projects in Ft. Lauderdale, Fla., valued respectively at $154 million and $150 million. In April, the top five metropolitan areas ranked by the dollar amount of multifamily starts were – New York, Seattle, Miami, Los Angeles, and Washington D.C. Metropolitan areas ranked 6 through 10 were – Dallas-Ft. Worth, San Francisco, Boston, Minneapolis-St. Paul, and Philadelphia. Single family housing in April fell 4 percent, settling back from the steady activity that was present during the previous five months. By major region, single family housing performed as follows in April – the West, down 6 percent; the Midwest and South Atlantic, each down 4 percent; the Northeast, down 2 percent; and the South Central, unchanged from the previous month.

The 7 percent downturn for total construction starts on an unadjusted basis during the January-April period of 2018 was due to reduced activity for two of the three main construction sectors.  Nonresidential building dropped 18 percent year-to-date, with commercial building down 16 percent and institutional building down 25 percent, while manufacturing building advanced 14 percent.  The year-to-date comparisons are relative to particularly strong activity during the first four months of 2017, that included groundbreaking for such unusually large projects as the $3.6 billion Central Terminal Building replacement project at LaGuardia Airport in New York, the $1.9 billion Delta relocation to Terminals 2 and 3 at Los Angeles International Airport, and the $1.3 billion Oceanwide Center Tower in San Francisco.  Nonbuilding construction fell 10 percent year-to-date, with public works down 5 percent and electric utilities/gas plants down 45 percent.  Residential building increased 4 percent year-to-date, with 4 percent gains registered by both single family and multifamily housing. By geography, total construction starts during the first four months of 2018 showed this pattern – the Midwest, down 13 percent; the West, down 11 percent; the Northeast, down 8 percent; the South Central, down 5 percent; and the South Atlantic, down 1 percent.

Additional perspective is made possible by looking at twelve-month moving totals, in this case the twelve months ending April 2018 versus the twelve months ending April 2017.  On this basis, total construction starts held steady with the volume of the previous period  By major sector, nonresidential building dropped 3 percent, with commercial building down 8 percent. institutional building down 3 percent, and manufacturing building up 32 percent. Nonbuilding construction rose 1 percent, with public works up 5 percent while electric utilities/gas plants fell 14 percent.  Residential building grew 3 percent, with single family housing up 7 percent and multifamily housing down 7 percent.