New construction starts in June grew 4 percent from the previous month to a seasonally adjusted annual rate of $679.9 billion, according to Dodge Data & Analytics.  Nonresidential building increased 13 percent in June, strengthening after two months of lackluster activity, and the nonbuilding construction sector rose 8 percent with the help of elevated activity for electric utilities.  However, residential building slipped 4 percent in June, as both sides of the housing market (single family and multifamily) retreated.  Through the first six months of 2017, total construction starts on an unadjusted basis were $342.7 billion, down 4 percent from the same period a year ago.  If the manufacturing plant and electric/utility gas plant categories are excluded, total construction starts during the first half of 2017 would be up 1 percent from last year.

June’s data lifted the Dodge Index to 144 (2000=100), compared to 138 for May.  Even with June’s improved activity, the Dodge Index averaged 139 for the second quarter, down 10 percent from the first quarter’s 154 average.  Since last year, total construction starts have shown an up-and-down pattern on a quarterly basis, including a 6 percent decline in the fourth quarter of 2016 which was then followed by a 7 percent increase in this year’s first quarter and now a 10 percent decline in the second quarter.  “A maturing construction expansion is characterized by deceleration in the overall rate of growth, that’s often accompanied by up-and-down behavior on a quarterly or monthly basis,” stated Robert A. Murray, chief economist for Dodge Data & Analytics.  “The 11 percent to 12 percent yearly increases for total construction starts during the 2012-2015 period were followed by a 4 percent gain in 2016, and several factors suggest that 2017 should still see modest growth for the year as a whole.  These factors include commercial vacancy rates that remain low as well as greater construction funding coming from the state and local bond measures passed in recent years. At the same time, it’s become apparent that any impact from a new federal infrastructure program, should one get passed during the latter half of 2017, would benefit construction more in 2018 and 2019.”

“The first half of 2017 has seen nonresidential building advance, reflecting further growth for office buildings and warehouses, combined with the boost coming from the start of several massive airport terminal projects such as the $3.4 billion Central Terminal Building at LaGuardia Airport in New York City,” Murray continued.  “Residential building so far in 2017 has been mixed, with some growth for single family housing earlier this year, while multifamily housing appears now to be trending downward after peaking in 2016.  Public works construction has been sluggish so far in 2017, although on the plus side it’s received support from the start of several huge pipeline projects, including the $4.2 billion Rover natural gas pipeline located in Michigan, Ohio, West Virginia, and Pennsylvania. On balance, the volume of construction starts so far in 2017 is slightly ahead of last year, if one excludes the often volatile manufacturing building and electric utility/gas plant project types.”

Nonresidential building in June was $249.6 billion (annual rate), up 13 percent from May. The commercial categories as a group climbed 23 percent, led by an 83 percent surge for new office building starts.  There were 8 office projects valued at $100 million or more that reached groundbreaking in June, led by a $585 million Facebook data center in the Omaha NEarea, the $400 million office portion of the $500 million renovation of the Willis Tower in Chicago IL (involving remodeling of the structure’s base and observation deck), and the $334 million office portion of the $600 million Diridon Station mixed-use complex in San Jose CA.  During the first half of 2017 the top five metropolitan areas ranked by the dollar volume of office construction starts were – New York NY, San Francisco CA, Washington DC, Dallas-Ft. Worth TX, and Atlanta GA.  (The first half 2017 ranking for those metropolitan areas helped by the three largest June office projects were – Chicago IL, number 6; Omaha NE, number 10; and San Jose CA, number 12.)  Hotel construction in June jumped 62 percent, boosted by the start of the $575 million hotel portion of the $900 million Seminole Hard Rock Hotel and Casino expansion in Hollywood FL and the $175 million hotel portion of the $350 million Hard Rock Hotel and Casino renovation in Atlantic City NJ.  The other commercial categories lost momentum in June, with stores and shopping centers down 2 percent, warehouses down 19 percent, and commercial garages down 31 percent.  The manufacturing building category in June increased 35 percent, lifted by the start of a $1.8 billion methane plant in Louisiana as well as groundbreaking for such projects as a $150 million pyrogenic silica plant in Tennessee and a $143 million pharmaceutical research laboratory in Missouri.

The institutional categories as a group were unchanged in June compared to May.  On the plus side, educational facilities rose 16 percent in June, led by the $160 million renovation of the Martin Luther King Jr. Memorial Library in Washington DC, a $125 million high school in Stratford CT, and a $114 million high school in Millville NJ.  The amusement and recreational category surged 58 percent in June, reflecting the start of the $193 million renovation of the Philips Arena in Atlanta GA, the $175 million casino portion of the Hard Rock Hotel and Casino renovation in Atlantic City NJ, and the $156 million casino portion of the Seminole Hard Rock Hotel and Casino expansion in Hollywood FL.  The public buildings category (courthouses, detention centers) and transportation terminals also contributed with June gains, rising 16 percent and 10 percent respectively.  However, healthcare facilities plunged 39 percent in June, pulling back after a 40 percent hike in May.  The religious buildings category also retreated in June, falling 38 percent.

Nonbuilding construction, at $155.4 billion (annual rate), increased 8 percent in June.  The electric utility/gas plant category ran counter to its generally declining trend this year, with June soaring 78 percent.  Large electric utility projects included as June starts were a $1.3 billion natural gas-fired power plant in Florida, a $1.1 billion wind farm and transmission line in Colorado, and a $296 million wind farm in Texas.  The public works categories as a group dropped 6 percent in June, making a partial retreat after a 26 percent jump in May.  The miscellaneous public works category, which includes such diverse project types as site work, pipelines, and mass transit, fell 16 percent in June.  Although June included $1.4 billion for work on the high-speed rail line project in central California, May had featured the start of several large natural gas pipeline projects, such as the $1.5 billion Revolution Pipeline expansion in western Pennsylvania and the $690 million Gulf South Coastal Bend Header Pipeline in Texas.  Highway and bridge construction in June decreased 7 percent, although the latest month did include the $396 million Interstate 95 Scudder Falls Bridge replacement project over the Delaware River in New Jerseyand Pennsylvania.  During the first half of 2017, the top five states in terms of the dollar amount of new highway and bridge construction starts were – California, Florida, Texas, Pennsylvania, and Georgia.  Two of the environmental public works categories registered gains in June, with water supply construction up 37 percent and river/harbor development up 14 percent.  The river/harbor development category was boosted by $350 million for Superfund remedial action at the New Bedford MA harbor.  Sewer construction, the third environmental public works category, receded 1 percent in June.

Residential building was $274.9 billion (annual rate) in June, down 4 percent.  Single family housing slipped 4 percent, continuing to settle back in June from the strengthening that took place during the first two months of 2017.  June’s pace for single family housing was still 3 percent above the average monthly amount reported during 2016.  By region, the first half of 2017 showed this performance for single family housing compared to last year – the South Atlantic, up 13 percent; the South Central, up 8 percent; the Midwest, up 7 percent; the West, up 5 percent; and the Northeast, up 1 percent.  Multifamily housing in June dropped 7 percent, sliding back for the third month in a row.  Large multifamily projects that reached groundbreaking in June were led by a $287 million apartment complex in Anaheim CA, a $185 million apartment building in New York NY, and a $164 millioncondominium complex in Pompano Beach FL.  Through the first half of 2017, the top five metropolitan areas ranked by the dollar amount of multifamily starts were – New York NY, Los Angeles CA, Chicago IL, San Francisco CA, and Washington DC.  Metropolitan areas ranked 6 through 10 were – Atlanta GA, Miami FL, Philadelphia PA, Boston MA, and Seattle WA.  The New York NY metropolitan area, while still the largest multifamily construction market in the nation, dropped 23 perrcent during the first half of 2017 compared to last year, which follows the 29 percent decline reported for all of 2016.  Other metropolitan areas in the top 10 with reduced multifamily construction in the first half of 2017 relative to last year were Chicago IL, Miami FL, Boston MA, and Seattle WA. 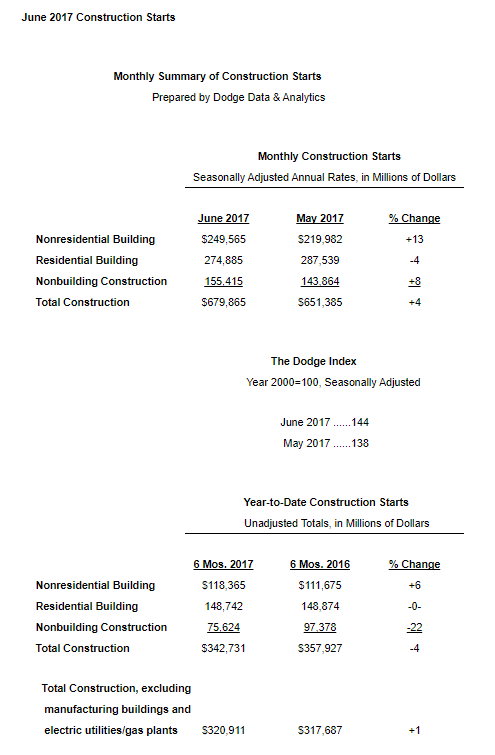