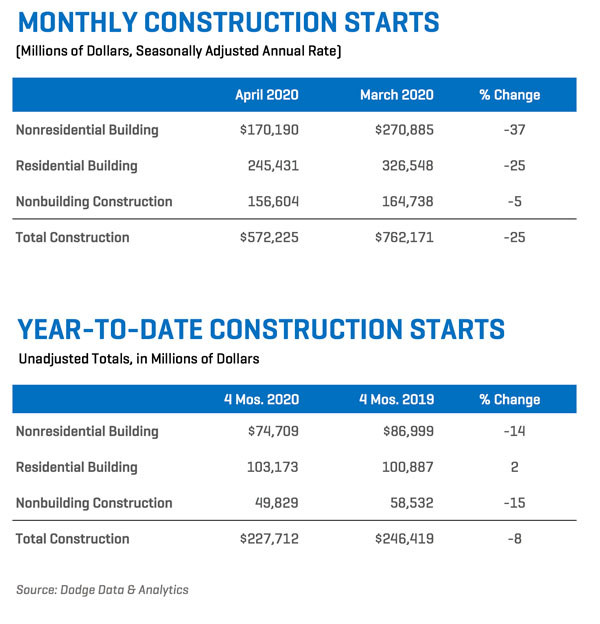 “The April starts data is definitely sobering, but also very much expected,” stated Richard Branch, Chief Economist for Dodge Data & Analytics. “The near shuttering of the economy during April had a significant negative effect on the construction industry, leading to delays in both ongoing projects as well as those about to break ground. Even though parts of the country are beginning to reopen, and some areas that had paused construction are now restarting, it will be a very long road back to normalcy for the construction industry. Continued fear of a resurgence in the virus will lead to a continued reduction in economic activity over the coming months, affecting construction projects across the country. The economic and construction recoveries will remain sluggish until a vaccine or viable treatment becomes available.”

Nonbuilding construction fell 5% in April to a seasonally adjusted annual rate of $156.6 billion. The utility/gas plant category dropped 52% during the month, but much of that decline was the result of very strong starts in March as several large projects broke ground. Environmental public works also fell in April, losing 3%. On the plus side, the miscellaneous nonbuilding category rose 9% and highway and bridge starts increased 26%. The largest nonbuilding projects to break ground in April were the $673 million I-10 project in San Bernardino, California, the $410 million US Route 101 project in Santa Barbara, California,, and a $369 million road resurfacing project in Tallahassee, Florida.

Year-to-date through April, nonbuilding construction starts were 15% down versus the first four months of 2019. Starts in the highway and bridge category were up 5% through April but were down sharply for other nonbuilding categories. For the twelve months ending in April 2020, total nonbuilding starts were 5% higher when compared to the same period a year earlier. Starts in the utility/gas plant category were 60% higher, while environmental public works were down 5%. Street and bridge starts were 3% lower for the twelve months ending in April, while miscellaneous nonbuilding were down 14%.

Nonresidential building starts crashed 37% from March to April reaching a seasonally adjusted annual rate of $170.2 billion – the lowest monthly reading since early 2014. April’s decline was much sharper than any single month-to-month drop seen during the Great Recession. The severity of the decline was widespread. Commercial starts fell 47%, manufacturing starts dropped 56%, while institutional construction starts lost 26%. The largest nonresidential building project to start in April was the $950 million expansion of Portland International Airport. Also starting during the month were the $253 million Wildcreek High School/Procter Hug High School in Sparks, Nevada, and the $140 million Waddell & Reed headquarters tower in Kansas City, Missouri.