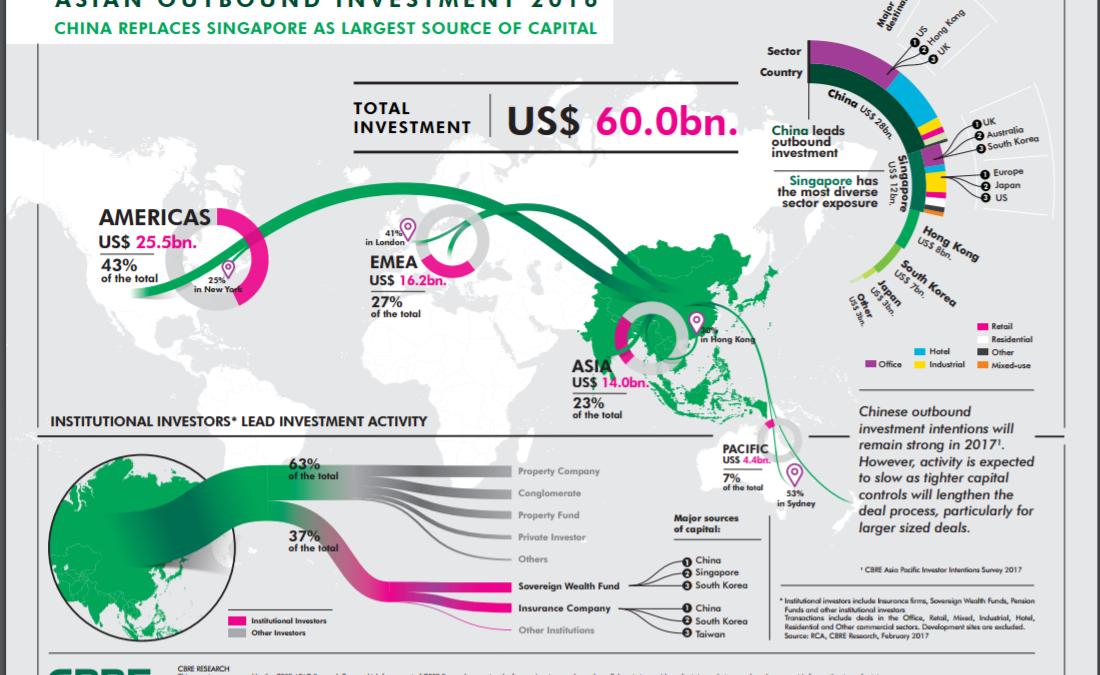 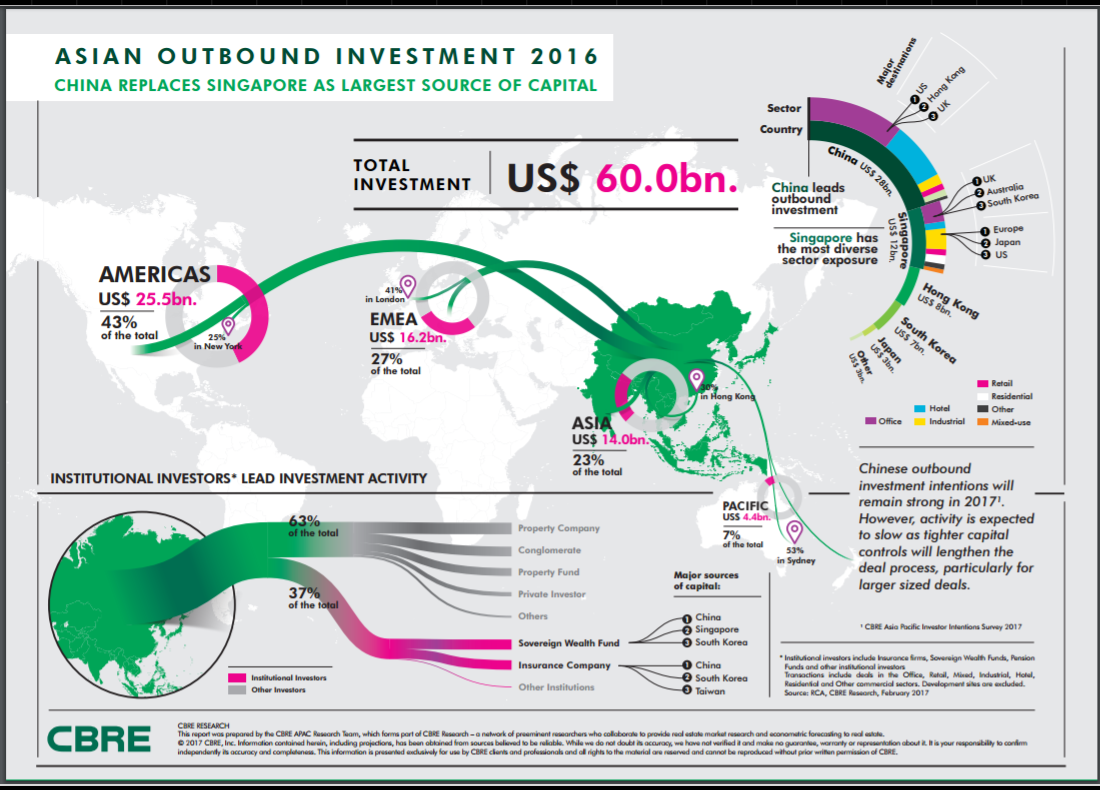 Asian outbound real estate investment was dominated by Chinese investors in 2016, accounting for nearly half of total investment—with 47% or US$28.2 billion—according to latest data compiled by CBRE. Overall outbound investment activity by Asian investors remained robust with institutional investors continuing to lead investment activity, contributing to six of the top ten biggest outbound deals of the year.

“With more scrutiny on cross-border capital flows and rigorous checks by the government which may lengthen the approval process, Chinese outbound real estate investment may moderate, gathering at a more sustainable rate. Instead of larger transactions, Chinese investors may simply opt for a higher number of smaller deals. Regardless, Chinese appetite for global real estate investment will remain solid but more cautious, with Chinese insurers and qualified Asset Managers being the active institutional investor class,” added Ms. Siew.

For the second consecutive year, CBRE figures reveal that the U.S. remained the most favored destination for Asian capital, drawing 43% of the overall total, followed by EMEA as the second-favored at 27%. Asia—with figures showing an increase of intra-regional activity this year—comprised 23% of overall investment turnover, up from 21% in 2015, which shows that Asian investors favored to keep more capital within their own region.

New York surpassed London as the top metropolitan destination for outbound investment in 2016, however, it contributed to a smaller share compared to 2015. The total top five destinations—New York, London, Hong Kong, Seoul and Sydney—contributed to 37% of the overall total, a decrease from 42% y-o-y, revealing that investment was spread across more diverse destinations.

“Asian investors are now showing more interest and seeking out assets in more diverse markets globally. Compared to 2015, more capital was deployed to alternative gateway cities in search of attractively priced opportunities. Places in Continental Europe such as France and the Netherlands; Chicago, San Francisco and Washington in the U.S.; and Vancouver in Canada, are now on more investor radar screens,” commented Robert Fong, Director of Research, CBRE Asia Pacific.

“While China, Singapore, Hong Kong and South Korea are still the four major sources of outbound investment capital, we are seeing emerging activity from other markets, such as India. There was a significant uptick of Japanese investment targeted mostly for the U.S. We expect Japan to step-up overseas investment in the year ahead as they are coming off a low base,” said Mr. Fong.

The office sector remained the most-preferred asset class for Asian investors, accounting for half of overall investment. Gateway cities of London, New York and Hong Kong were the top three destinations for office investment. Meanwhile, the hotel sector garnered more interest with U.S. hotel assets attracting significant international investment—the biggest transaction of the year was a hotel acquisition in the U.S. by a Chinese investor.

Furthermore, 2016 saw more interest in niche sectors—student housing and healthcare in particular—by experienced Asian investors. It was the first time that transactions were recorded in the student housing sector; three major deals were completed by Singaporean investors in 2016.