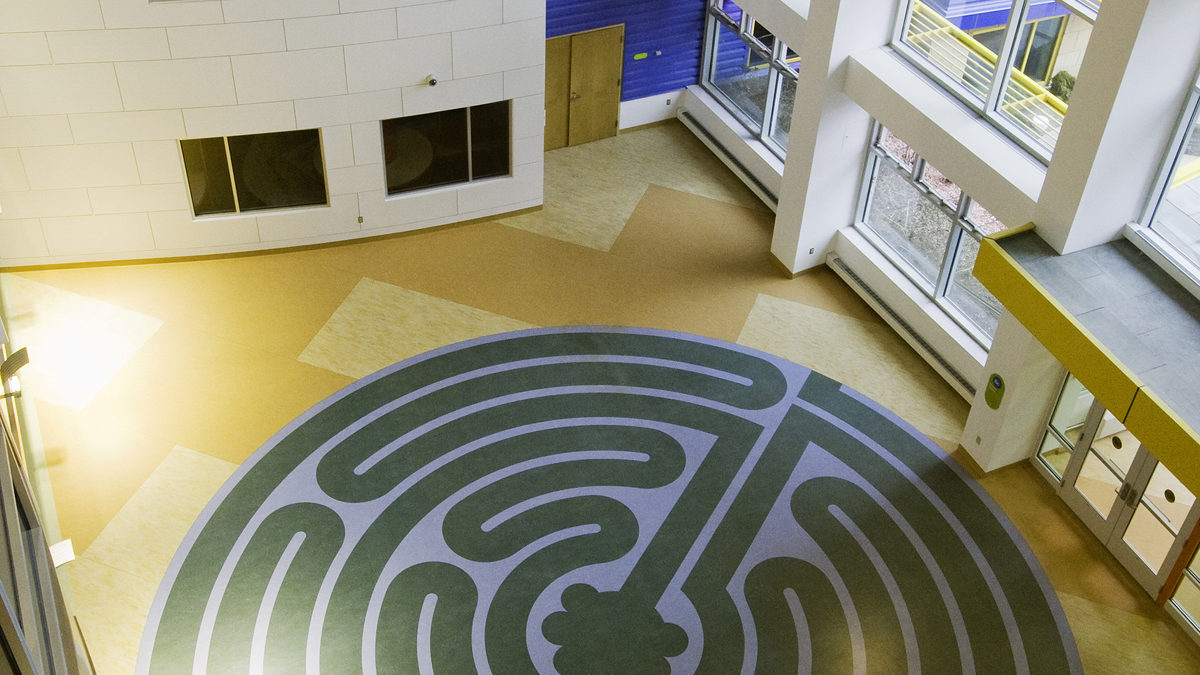 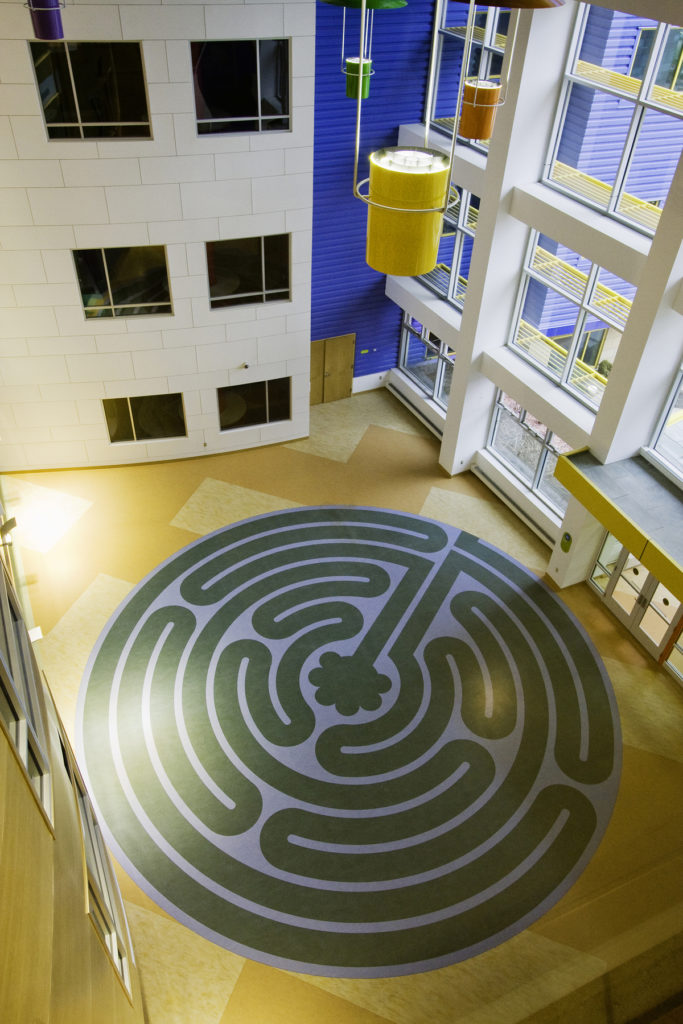 If you doubt that buildings can have healing properties, plan on paying a visit to Children’s Hospital of Pittsburgh of UPMC. There you’ll find a hospital and research tower that were planned and built in a bold new way. The process began with a clean slate and a provocative question: How can every aspect of the built environment be used to improve a child’s health?

The answer is easy to see in a new 1.5-million-square-foot complex that is obviously dedicated to making kids feel better. Visitors instantly notice the combinations of bright colors and interesting designs that lend a cheery and whimsically childlike appeal to the interior spaces of the facility. One of the most notable features is the Transformation Corridor, a hallway between the parking structure and the hospital that is alive with butterfly imagery, signifying the metamorphosis from disease to health that takes place within. Features like these earned Children’s recognition as one of the world’s most beautiful hospitals from the industry publication HealthExecNews1 in 2012.

The difference between Children’s and an average hospital is far more than skin deep, however. The facility’s planning team searched around the world to find construction materials, building techniques and maintenance practices that maximize the health of both patients and staff. The welfare of future generations of kids were factored into their thinking as well, as reflected by the hospital’s decision to become one of the first pediatric medical centers in the United States to strive for LEED certification from the US Green Building Council. Both the hospital and the research tower have since been granted LEED status, with the research tower earning a LEED silver designation.

Practically everything that goes into creating a hospital was re-examined in a fresh new light in the development of a design for Children’s. “The health of children is not something people take in a halfway measure,” observed Eric Hess, Vice President of Operations and the leader of the Children’s project management team. “We wanted everything in our facility to be the absolute best for the kids in our community, and LEED was a big help in focusing us in that aim.” The LEED certification process naturally shifts attention away from construction details to consider the way a building will harmonize with the natural environment and human communities that surround it. “(LEED is) a great way of keeping the team’s eyes on what matters most.” Hess stated.

LEED shaped the finished facility in a practically endless variety of ways, including:

Choice of building materials played a significant role in Children’s Hospital’s LEED achievements. Choosing flooring was given a high priority, thanks to the fact that 750,000 square feet of the material would be installed in the two new buildings. Flooring was considered so crucial that a team of representatives from the hospital and its architecture/design firm traveled to the Netherlands to learn more about the manufacturing of Marmoleum and MCT (Marmoleum Composition Tile), the environmentally friendly resilient floor coverings that were eventually specified for most areas in both buildings.

“In all our years of experience in healthcare, I don’t think we’ve ever seen a hospital that put such a high priority on choosing the right flooring,” said Denis Darragh, General Manager for Forbo North America, the firm that manufactured the floor covering which fills 75% of the newly built space. “I remember the perspective they expressed when they first came to us,” he added. “They told us that children they cared for were going to be crawling across our floors. That meant they needed to be as healthy as possible.”

In addition to its environmental friendliness, Marmoleum also met Children’s Hospital’s long term goals to create a hospital that minimizes maintenance costs. “As the Vice President of Operations, it’s only natural for me to think about how cost effective things will be to maintain in the long run,” said Hess. “We need to make sure that world class health care for children stays affordable, to care for children at every level of income.”

The goal has been achieved according to the hospital’s leadership. “Our experience here at Children’s Hospital has been a very valuable one,” said Chris Connelly, Director of the Hospital’s Environmental Services department. “We haven’t done any scientific study on it,” Connelly observed, “but I would say we’ve cut our floor maintenance budget in half.”

“Children’s hospitals are among the toughest challenges from a floor maintenance standpoint,” Connelly added. “Children in the hospital get more visitors, and moms and dads are often staying with their kids. That means a much higher level of foot traffic than you’d find at an ordinary hospital.” Connelly noted that caring for Marmoleum is much easier than the floor care regimen required with traditional Vinyl Composition Tile (VCT), which makes Marmoleum especially well suited to the children’s hospital environment. “It’s great, because you can work on floors anytime during the day without interrupting the work at the nursing stations,” Connelly said.“ There’s no need to schedule our floor care in nighttime hours, which means the sound of the floor machines working never needs to wake up the kids or their parents

There is also no need to schedule night shifts and overtime hours for floor finishing. Hess noted that “The savings in time and materials normally dedicated to flooring maintenance are now able to be reallocated to other critical cleaning and maintenance projects. As a result, we have a cleaner, healthier environment for our children, their families and our professional staff.” Finishing with a healthy outcome The finished project wowed the Pittsburgh community it serves, while also achieving another astounding result. “We hit our projected completion date on this project, and we didn’t exceed our budget number,” Hess said, adding, “I don’t know too many people who can look you in the eye and say that with a straight face.”

Hess attributes the achievement to finding experts who were delivering at a very high level, and infusing them with Children’s passion for improving kids’ health. “it sound like a cliché, but we did this by surrounding ourselves with the right people,” Hess said. “It’s really a matter of spirit. We were not going to settle for less than the best, and that spirit has a way of spreading to everyone involved.”

“Everybody at Forbo is exceptionally proud of our involvement in this project,” added Darragh. “When you find a client who cares this deeply about achieving a great outcome…for kids and for the environment of the community at large…you can’t help but be inspired to go beyond anything you ever thought possible.”
The achievement didn’t end with the May 2009 opening of the new Children’s Hospital. Hess noted that the commitment continues in ongoing efforts to improve the sustainability of the hospital’s maintenance, food service and waste management practices. Children’s also plans to conduct research on the effects of sustainable practices on the health of children. “We want the benefits of our experience to spread beyond our campus,” said Hess, who hopes that the efforts in Pittsburgh will serve as an inspiration to other hospitals seeking greater sustainability. “This has truly been a partnership,” added Darragh. “We feel privileged to work with a partner who wants to benefit its community, and is willing to expand its vision and effort to improve the health of its industry and world beyond.”