CAPTION: This illustration shows networking of multiple subsystems across multiple facilities (campus), all integrating into one centralized system.

Every year, more and more commercial buildings are being designed, as well as renovated, with a Building Automation System (BAS) in order to efficiently control, monitor and maintain key building subsystems, like HVAC, lighting, and access control. Currently valued at over $50 billion, the BAS market is projected to aggressively grow over the next 10 years. What is spurring this incredible growth? The realization that a properly implemented Networked Controls BAS provides amazing benefits to owners and facility managers. And the BACnet makes this happen.

As a data communication protocol, BACnet’s purpose is to standardize communications between BAS devices regardless of the manufacturer. These devices can then adapt to changes throughout the facility by sharing data and control.

For example, when an individual enters the facility, settings for the lighting and HVAC systems can adjust based on occupancy data.

While a BACnet-based Networked Controls BAS allows subsystems to interact, it also allows devices within a subsystem to easily interact over a network, lowering wiring costs and allowing for a much broader set of integrated controls and data sharing.

The illustration shows a boiler plant that includes VFDs on pumps and hardwired sensors and safeties. Using a BACnet-based Networked Controls BAS, devices with BACnet can seamlessly interact with one another.

By networking devices using the BACnet protocol, a more simplified, scalable infrastructure is created, allowing the system to readily change based on the needs of the facility. The BACnet-based Network Controls BAS can be scaled from one or two subsystems all the way up to a large campus installation. 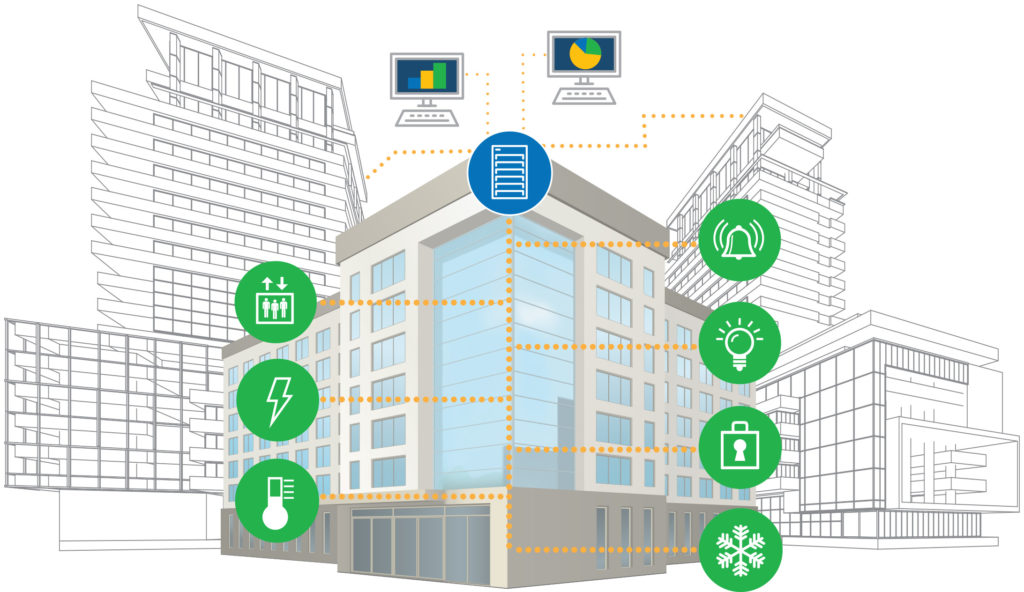 This illustration shows networking of multiple subsystems across multiple facilities (campus), all integrating into one centralized system.

In the example, the dashboard shows water consumption of an office building for two consecutive weeks.

The first week illustrates typical consumption. The second week shows a significant increase in consumption over the weekend. Since outdoor temperatures were the same and the building was unoccupied both weekends, the visual dashboard helps alert the FM to possible faulty equipment or incorrect settings.

Buildings are always being renovated, remodeled or rebuilt due to new initiatives relating to sustainability, energy savings, and cost reductions. As a result, the BACnet standard is continuously reviewed and updated to incorporate technologies that support those innovations. By implementing a BACnet-based Network Controls BAS, building owners and facility managers are able to not only realize the benefits mentioned but also quickly leverage any new technology.

How do you make sure your BAS implementation is successful?

The BACnet Institute now offers the Facility Manager’s Guide to Building Automation Systems course. This course discusses not only IT considerations in design and implementation of a BAS, but also the principles of a BAS design, effective procurement best practices, as well as the benefits of streamlined facilities management using a Networked Controls design model.

To access this, as well as many other BACnet-related resources, visit The BACnet Institute. Registration for the site is free.