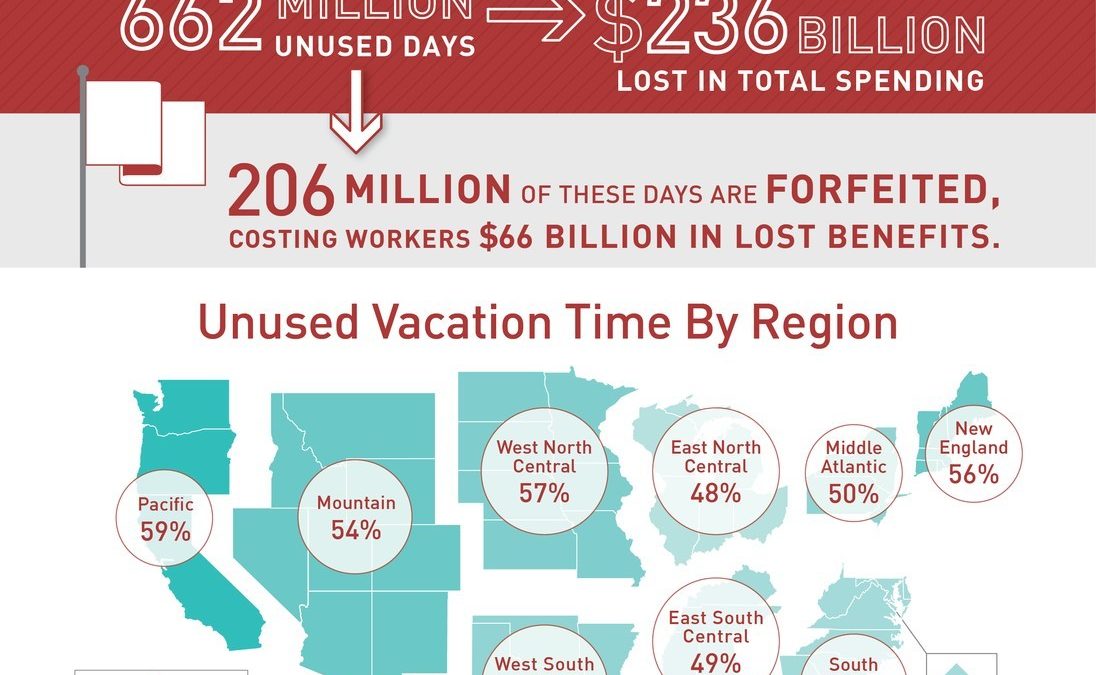 American workers took an average of 16.8 days of vacation in 2016, according to new research from Project: Time Off, turning the trend line in a positive direction after losing almost a week of vacation time since 2000. The jump, up from 16.2 days in 2015, provides reason to be cautiously optimistic about America’s vacation habits.

Taking time off continues to be a challenge in America’s always-on work culture with more than half (54%) of employees ending 2016 with unused vacation time, a slight decrease from 2015 results (55%). These findings, from Project: Time Off’s State of American Vacation 2017 report, provide the most comprehensive annual look at America’s vacation habits based on GfK survey research of 7,331 U.S. employees who earn time off and economic analysis conducted by Oxford Economics. See the report for a full methodology.

Project: Time Off, Vacation in America 2017.

“For the first time in many years, there is reason to believe that America’s bad vacation habits may be improving,” said Project: Time Off Senior Director and report author Katie Denis. “Our workforce still has a long way to go to rewire its thinking that hours worked and busyness are equivalent to productivity. But make no mistake, the increase in vacation usage is a positive indicator for American work culture.”

While Americans are taking more vacation time, there is also a slight increase in the number of days left unused. In 2016, 662 million vacation days were left on the table, four million days more than 2015. However, forfeited vacation days—time that cannot be rolled over, banked, or paid out—are down eight percent to 206 million forfeited days. Those forfeited days have a cost. Last year, employees gave up $66.4 billion in lost benefits, which translates to an average of $604 per employee.

The Economics of Vacation Time

The jump in vacation usage from 16.2 to 16.8 days delivered a $37 billion total impact to the U.S. economy. But there is more economic potential to be gained as lost spending from America’s millions of unused days cost the U.S. economy $236 billion in 2016. Had those days been used, they had the potential to create 1.8 million jobs and generate $70 billion in additional income for American workers.

The increase in vacation usage may be tied to the majority of Americans (54%) planning their time off. Workers who set aside time to plan their vacation days are more likely to take all of their time off (52% to 40%). They also tend to take longer vacations. While three-in-four (75%) planners take a week or more at a time, non-planners take significantly fewer days—zero to three—than planners at once (42% to 18%). The benefits extend beyond the days spent away from the office. Planners are happier than non-planners in every category measured—relationships, health and well-being, company, and job.

Many employees hold fast to the belief that the path to career success requires sacrificing vacation and embracing work martyrdom. The data tells a vastly different story. Thirty-eight percent of employees said they want to be seen as a work martyr by their boss, but they are less likely (79% to 84%) to report receiving a raise or bonus and are no more likely to have received a promotion in the last year than the average worker (28% to 28%).

“We need to put to rest the fallacy that ‘work ethic’ is equivalent to work martyrdom,” said Project: Time Off Director of Communications Cait DeBaun. “Not only are employees not getting ahead by sacrificing time off, these habits may also be harming their careers.”

Nearly all (96%) American employees say vacation is important to them, yet there is a disparity based on gender and seniority in vacation usage and perceptions of workplace vacation culture.

Men were more likely than women to use all their vacation time in 2016, up three percentage points from 2015 to 48 percent. While women say that vacation is “extremely” important to them, more so than men (58% to 49%), only 44 percent of women use all their time off. This disconnect between belief and behavior only worsens among Millennial women who, despite being more fervent believers in the benefits of time off than their male counterparts, take less time off (44% Millennial women vs. 51% Millennial men) due to an overwhelming amount of reported guilt, fear, and work martyr habits.

Whether some of these fears are warranted or not, muddled messaging in the workplace extends beyond gender and generational differences. An employee’s view of their company and corresponding vacation culture varies based on their rung of the corporate ladder. Compared to non-managerial employees, senior leaders are more likely to believe the company encourages vacation (50% to 30%), feel supported by management (59% to 39%), and hear about the value of taking time off (62% to 51%). Despite their positive feelings about company culture, senior leaders feel the pressures of taking time off more acutely and are less likely to use their days than non-managers (61% to 52%).