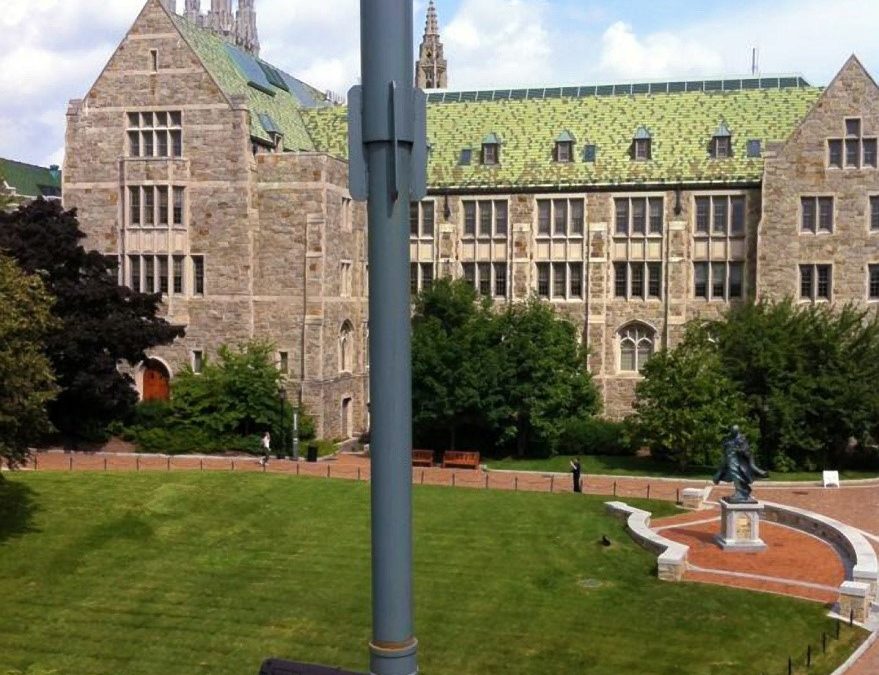 After an audit of 50 generators on its three campuses, Boston College set about modifying the stacks of 22 emergency diesel generators to increase the distance between their exhaust and receptors and to effect compliance with Massachusetts Department of Environmental Protection regulations.

Boston College was concerned.  Gail Hall, the college’s Director of Health & Safety, had just been notified by the Massachusetts Department of Environmental Protection (DEP) that three emergency diesel generators on the college’s Newton, Massachusetts, campus were not in compliance with the state’s clean air standards.  The generators, which produce electric power for emergency lighting and elevators in the event of a utility power outage, were emitting unacceptable levels of airborne particulates. After an initial investigation, the college realized that the issue was considerably bigger than the three generators cited.  Solving it would entail assistance from an environmental consulting firm; a continued commitment by the college’s administration to the health and safety of its students, staff, visitors, and neighbors; and a new active diesel particulate filter technology from a Massachusetts company, Rypos.

To address the problem, Gail worked closely with Boston College’s administration and GeoInsight, a Littleton, Massachusetts, environmental consulting firm that had been handling air emissions permitting, compliance reporting, and other support services for Boston College.  After an initial meeting to discuss the DEP’s directive, Boston College commissioned GeoInsight to conduct a comprehensive survey of all its emergency generators including locations, sizes, buildings served, exhaust stack configurations and heights, and the proximity of receptors—air intakes, doors, windows, vents, or any other openings in building envelopes that could allow potentially harmful airborne particles into confined living or meeting spaces. The primary focus of the survey was to identify all campus generators that did not meet DEP air quality emission regulations and to bring them into compliance.

When Boston College’s emergency diesel generators were cited for noncompliance with Massachusetts clean air standards, the administration chose to install new active regeneration technology filters from Rypos rather than accept the risks and expense of passive filters.

The survey showed that, of the 50 generators serving Boston College’s three campuses, 19 were in compliance with Massachusetts DEP regulations. Of the remaining 31 generators that did not meet current state regulations, 22 could be remedied through modifications to their exhaust stacks to divert emissions away from receptors.  Due to their sensitive locations and other considerations, however, the remaining nine generators would require a more advanced solution that actually eliminated the airborne particulates rather than just diverting them.

In order to avoid highly intrusive modifications to the buildings where these generators were housed and to preserve the aesthetics of Boston College’s beautiful campus, the school began exploring diesel particulate filter technologies.

GeoInsight first investigated the possibility of using passive diesel particulate filters, but rejected the idea.  Suzanne Pisano, GeoInsight’s director of compliance, explains, “Whenever we are faced with a problem like this, we look for a solution based on the best achievable control technology.  In this case, the Rypos active diesel particulate filter was that technology.  There are other replaceable filter options, but they would have imposed limitations on the run times of the generators and required high maintenance.  If we had gone with passive filters, we would have risked having to choose between shutting down generators during an outage due to run time restrictions or incurring engine damage and possible DEP fines.”

The irony that passive diesel particulate filters meant to protect the college’s students and staff could actually leave them at risk was not lost on Pisano.

In her search for a more acceptable solution, she came across Rypos, Inc., a Franklin, Massachusetts, company specializing in actively regenerating diesel particulate filters (or active DPFs).  Made from sintered metal fibers, these segmented filters are electrically regenerated (or cleaned) by heating to 700°C and incinerating the trapped soot containing toxic contaminate particles.  The system’s microprocessor control monitors filter back pressure, temperature, and elapsed time between regenerations to optimize regeneration cycles and maximize filter efficiency and generator availability.  Entirely automated, the regeneration cycle takes only three minutes and uses less than one percent of the generator’s electrical output.  The company’s segmented filter design makes this rapid, extremely energy efficient cleaning possible.  By limiting each 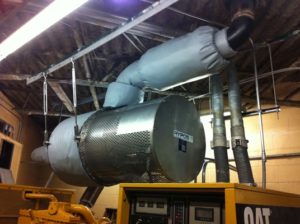 The college installed Rypos Active Diesel Particulate Filters (ADPF) on nine generators. Through a process known as regeneration, Rypos ADPFs clean themselves by heating up to 700°C and burning off harmful particulate contaminants in less than three minutes, using less than 1% of the generator’s output.

cycle to a single filter element, regeneration can be performed quickly with no impact on power availability from the generator.  The built-in control system tracks which segments recently have been cleaned and schedules which ones are due to be cleaned.

The Rypos systems installed at Boston College reduce harmful emissions by trapping and eliminating harmful particulates and converting carbon monoxide and other hydrocarbons into carbon dioxide and water.

The company’s Active DPF systems can also be configured with selective catalytic reduction (SCR) to achieve NOx reductions of 95% or more.

Pisano and her team were impressed by this active regeneration technology for a number of reasons.  It eliminates the time and expense of changing passive filters as well as the associated downtime.  The technology also eliminates any restrictions on cold starts or idle times.  And the regeneration process is not dependent on engine temperatures.  With the active filters, no maintenance is required and generator availability is 100%.

GeoInsight drafted a plan to bring the problem generators into compliance with DEP regulations.  And while Suzanne Pisano negotiated the timetable with the Department of Environmental Protection, Gail Hall worked with Boston College’s administration to secure funding (the project was unplanned and not budgeted) and the college’s facilities department to ensure that the work would be completed on time.

Based on the timetable approved by Massachusetts DEP, the project was to be completed in two phases by the end of September 2012.

Most of the work was performed by contractors under the direction of Boston College Project Manager Paul Scarnici. 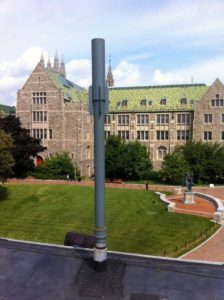 After an audit of 50 generators on its three campuses, Boston College set about modifying the stacks of 22 emergency diesel generators to increase the distance between their exhaust and receptors and to effect compliance with Massachusetts Department of Environmental Protection regulations.

Based on GeoInsight’s plan, Phases I and II focused on “easy fixes”—those generators that could be brought into compliance by reconfiguring their exhaust stacks (replacing right-angle or snub-nosed stacks with straight ones) or increasing the height of the stacks to disperse the particulates over a larger area.  This phase involved nine emergency generators and was completed in six weeks.

It takes a summer to install Active Diesel Particulate Filters

Phase II of the project also included installing Rypos Active Diesel Particulate Filters on the remaining nine generators and took the better part of the summer of 2012.  Scarnici turned to Milton Cat to coordinate the installation of the filters and to oversee the contractor doing the work.

The filters were installed on top of the generators to save space and reduce cost.  In cases where the generator enclosures were not strong enough to support the weight of the filters, special frames were constructed.

Notes Scarnici, “The project went very smoothly thanks to efforts of a lot of truly talented people at Rypos, Milton Cat, and Boston College.” 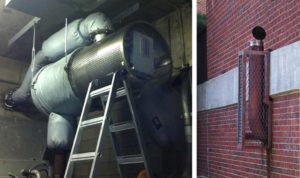 Installed on a generator in the basement of 2000 Commonwealth Avenue, a high-rise Boston College residence hall, Rypos Active Diesel Particulate Filters eliminated the high cost and construction problems of running an exhaust stack to the roof inside the building.

Looking back on the project, Gail Hall comments, “This project caught us a little off guard.  Being cited by the Massachusetts Department of Environmental Protection was unsettling; being given such a short window to remedy the problem was even more disconcerting.  But we hired good people who gave us good advice, and we completed the project ahead of schedule.  Moreover, we learned how to deal with future problems of this nature.”

And like everyone involved, Hall was impressed by the way the college administration responded:  “Boston College has responsibilities to ensure the safety of our students, to protect the environment, and to serve as responsible stewards of these beautiful campuses.  At times, any one of these responsibilities can be daunting, but this project challenged us to deal with all three at once.  I believe that everyone involved is proud of the manner in which Boston College lived up to its commitment.”