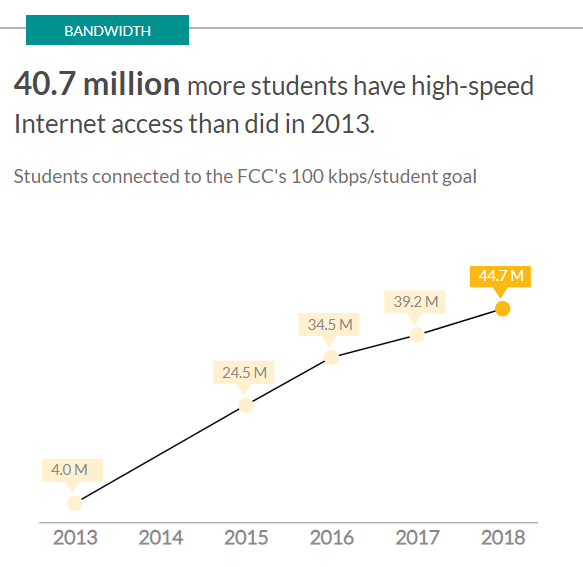 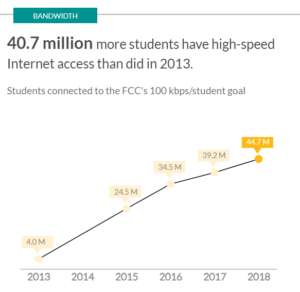 Courtesy of the EducationSuperHighway’s State of the State’s report.

EducationSuperHighway released in October its annual State of the States report highlighting the major progress that has been achieved to connect nearly every public school classroom to high-speed broadband. At the same time, the report cites the urgent need to close the digital divide for 2.3 million students across the nation who lack access to the minimum connectivity required for digital learning.

The report credits strong bipartisan support from state policymakers for the progress made over the past five years. Since 2013, 49 governors have led the effort that has connected an estimated 40.7 million more students to next-generation broadband and, 21,600 more schools to fiber infrastructure. Today, 44.7 million students and 2.6 million teachers in more than 81,000 schools have the Internet access they need for digital learning.

The report also points out that reaching the goal of connecting 99 percent of America’s K-12 students is well within our reach. Nearly two million of the 2.3 million students who still do not have access to the Federal Communications Commission’s (FCC) minimum standard of 100 kilobits per second (kbps) per student of Internet access are in just 62 school districts nationwide. Moreover, nearly 90 percent of these school districts can upgrade to the FCC’s goal without spending any more money.

“This year’s State of the States report clearly shows that state leaders have made extraordinary progress elevating the classroom experience for our kids,” said Evan Marwell, Founder and CEO of EducationSuperHighway. “Despite the incredible success bringing high-speed broadband to our classrooms, we can’t stop here. Millions of students in school districts across the country still need us to prepare them to compete in today’s technology-driven world.”

The State of the States report tracks progress toward the K-12 connectivity goals established by the Federal Communications Commission and provides state leaders with the information needed to finish the job of connecting America’s students to high-speed broadband. The report, published annually, is based on publicly available E-rate data.

More highlights from the 2018 State of the States Report:

“In Arkansas, our students are developing 21st-century skills in the classroom to succeed in tomorrow’s workforce. This requires high-speed Internet access in every school – which is why we upgraded the Arkansas Public School Computer Network and can now provide 1 Mbps per student to 98 percent of the school districts in Arkansas,” said Gov. Asa Hutchinson. “We must continue to meet school broadband demands as our teachers and students adopt more and more classroom technology. The fast-paced learning environment must not be slowed by insufficient broadband.”

Here are some of the ways faster bandwidth is creating educational opportunities for kids:

“The reality is that once digital learning enters a school, bandwidth demand continues to rise,” said Marwell. “100 kbps per student made technology available in America’s classrooms. But if we are to provide our students with equal access to educational opportunity, then we must embrace the FCC’s 1 Mbps per student goal so teachers can leverage technology in every classroom, every day.”

EducationSuperHighway was founded in 2012 with the mission of upgrading the Internet access in every public school classroom in America. EducationSuperHighway believes that digital learning has the potential to provide all students with equal access to educational opportunity and that every school requires high-speed broadband to make that opportunity a reality. EducationSuperHighway is funded by national philanthropic organizations including the Chan Zuckerberg Initiative and the Bill and Melinda Gates Foundation and our mission is supported by 49 U.S. governors and America’s leading CEOs.