2018 construction starts ‘healthy,’ but ‘slower rate of growth’ that is ‘close to peak’ 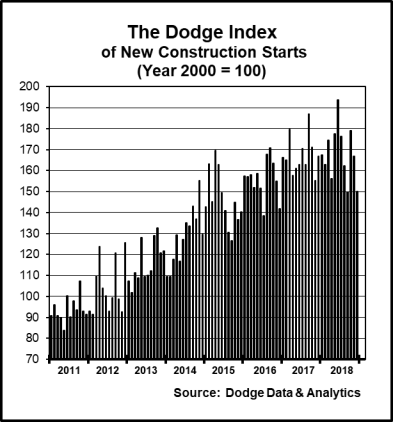 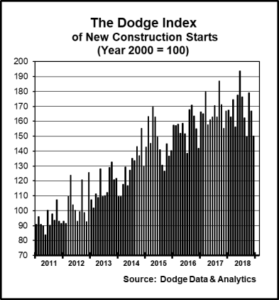 The December statistics produced a reading of 150 for the Dodge Index (2000=100), down from 167 in November and 179 in October, while matching the 2018 low at 150 reported back in September.  For the full year 2018, the Dodge Index averaged 167.  “The monthly pattern of construction starts was mixed during 2018, as elevated activity in June and October was offset by weaker activity in the months immediately following, with the end result being that the 2018 dollar amount of construction starts was slightly above the previous year,” stated Robert A. Murray, chief economist for Dodge Data & Analytics.  “By recent standards, the overall level of construction starts in 2018 can be regarded as healthy, but the substantially slower rate of growth compared to the prior six years is suggestive of a market that’s close to a peak.”

“There were several noteworthy features that stand out in the 2018 construction starts data,” Murray continued.  “Last year’s brisk economic expansion enabled market fundamentals for multifamily housing and commercial building to strengthen, which supported more growth for apartment projects, office buildings, and hotels. However, store construction continued to decline, adversely affected by the glut of retail space produced in the previous decade as well as by the greater role now played by e-commerce.  Single family housing showed improvement early in 2018, but then plateaued and began to recede given affordability constraints. The institutional building segment showed more growth for educational facilities and witnessed a number of major transportation terminals reach groundbreaking, although not to the same extent as what took place in 2017.  Public works construction benefitted from the 2018 omnibus federal appropriations bill passed last March, as well as funding arising from recent state transportation bond measures.  Going forward into 2019, economic growth is not expected to be as strong as what occurred during 2018, which may dampen groundbreaking for multifamily housing and commercial building projects.  In addition, more growth for public works this year requires that federal appropriations for fiscal 2019 get finalized without much further delay.” 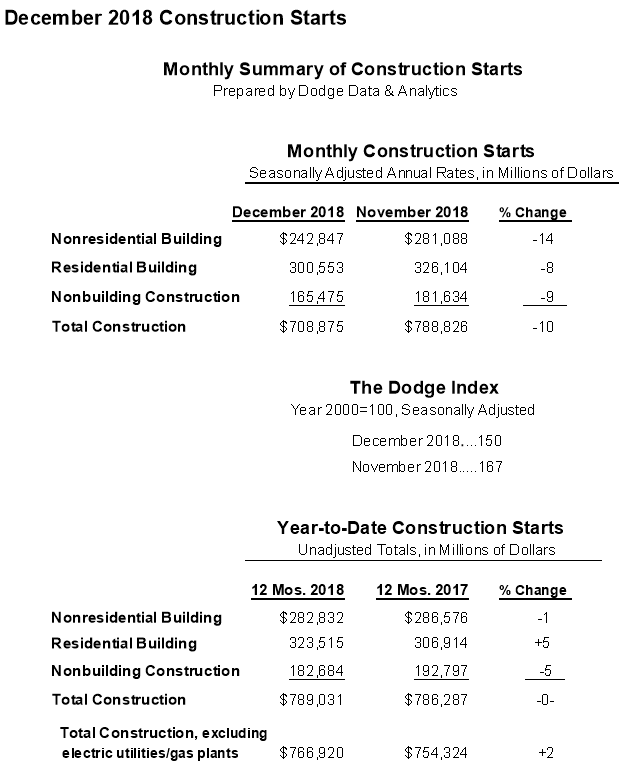 The institutional building categories as a group edged up 1 percent in December, after sliding 22 percent in November. Educational facilities provided much of the lift in December, climbing 27 percent with the help of these projects – the $650 million renovation of the Smithsonian National Air & Space Museum in Washington, D.C., a $118 million high school in Queens, New York, and a $101 million high school in Waukee, Iowa. The public buildings category also registered growth in December, advancing 48 percent as a $155 million courthouse reached groundbreaking in Redding, California.  In addition, December gains were reported for church construction, up 18 percent; and transportation terminals, up 1 percent.  Reduced activity was reported in December for amusement-related work, down 42 percent; and healthcare facilities, down 16 percent; although the latter did include the start of the $175 million Penn Medicine ambulatory care facility in Wayne, Pennsylvania.

For 2018 as a whole, nonresidential building eased back 1 percent to $282.8 billion after its 11 percent increase in 2017.  A major reason for the double-digit gain in 2017 was an 18 percent jump by the institutional building segment, which benefitted from a sharp 126 percent hike for transportation terminal starts.  Large transportation terminal projects that reached groundbreaking in 2017 included $7.6 billion for work at LaGuardia Airport in Queens, New York, and the $1.9 billion Delta relocation to Terminals 2 and 3 at Los Angeles International Airport.  In 2018, transportation terminal construction starts pulled back 42 percent, which contributed to a 7 percent decline for the institutional building categories as a group.  Even with its 2018 decline, transportation terminal construction was still healthy by recent standards (up 31 percent from its 2016 amount), and included $2.0 billion for the start of three projects at Denver International Airport, the $1.4 billion Newark Liberty International Airport Terminal One building, and the $740 million North Concourse Terminal at Salt Lake City International Airport.  Reduced activity in 2018 was also shown by healthcare facilities, which retreated 9 percent after its 6 percent gain in 2017 that included the start of the $1.4 billion Penn Medicine Patient Pavilion in Philadelphia.  In 2018, large hospital projects continued to reach groundbreaking, although not quite to the same extent as 2017, as the 2018 large hospital projects were led by the $500 million Cincinnati Children’s Hospital expansion in Cincinnati, and the $400 million Boston Children’s Clinical Building in Boston.  Full-year 2018 declines were also posted by church construction, down 21 percent; and the public buildings category, down 2 percent.  On the plus side for institutional building in 2018, educational facilities continued to see moderate growth, rising 5 percent and helped in particular by a 16 percent advance for K-12 school buildings. The top five states ranked by the dollar amount of K-12 school construction starts in 2018, with their percent change from the previous year, were the following – Texas, up 9 percent; California, up 30 percent; New York, up 12 percent; Washington, up 35 percent; and Pennsylvania, up 105 percent. Amusement-related construction starts also strengthened in 2018, rising 9 percent, with support coming from such projects as the $1.3 billion football stadium in Las Vegas for the soon-to-relocate Oakland Raiders, the $860 million expansion to the Las Vegas Convention Center, and the $810 million expansion to the Washington State Convention Center in Seattle.

The commercial building categories as a group grew 1 percent in 2018, the same as the 1 percent rise in 2017 which followed a 23 percent surge in 2016.  Office construction in 2018 advanced 10 percent, led by such projects as the $1.8 billion Spiral office building in the Hudson Yards district of New York, a $655 million office building on North Wacker Drive in Chicago, and the $644 million office portion of the $1.3 billion Winthrop Square Tower in Boston.  Large data center project starts, which are included in the office category, were also very strong in 2018, led by a $1.0 billion Facebook data center in Papillion, Nebraska, plus three Facebook data centers valued at $750 million each that were located in Huntsville, Alabama; Eagle Mountain, Utah; and Covington, Georgia.  There were also three very large Google data centers valued at $600 million each that reached groundbreaking in Clarksville, Tennessee; Pryor, Oklahoma; and Stevenson, Alabama.  The top five metropolitan areas ranked by the dollar amount of new office construction starts, with their percent change from the previous year, were – New York, up 22 percent; Washington D.C., up 36 percent; Boston, up 102 percent; Chicago, up 67 percent; and Atlanta, up 2 percent.  Hotel construction starts in 2018 climbed 11 percent, helped by such projects as the $643 million hotel portion of San Diego’s Manchester Pacific Gateway complex, the $450 million Omni Seaport Hotel in Boston, and the $320 million Four Seasons Hotel in New Orleans.  Commercial garage construction starts in 2018 held steady with 2017, while warehouse construction starts settled back 6 percent from a very strong 2017.  Store construction in 2018 fell 21 percent, dropping for the second year in a row after a 5 percent decline in 2017.  The manufacturing plant category in 2018 strengthened 20 percent, boosted by a $6.5 billion uranium processing plant in Oak Ridge, Tennessee, numerous outdoor chemical plants led by a $2.4 billion propylene oxide plant in Channelview, Texas, and more typical manufacturing plants such as an $800 million aluminum rolling mill in Ashland, Kentucky, and a $682 million Continental Tire plant in Clinton, Mississippi.

Residential building in December was $300.6 billion (annual rate), down 8 percent from the previous month.  Multifamily housing retreated 15 percent, slipping for the second month in a row after a 19 percent gain in October.  There were four multifamily projects valued at $100 million or more that reached groundbreaking in December, compared to ten such projects in November. The large multifamily projects in December were led by a $265 million apartment building in Oakland, California, and a $150 million apartment building in Long Beach, California.  Single family housing in December dropped 5 percent, settling back from the extended plateau that was present for much of 2018.  The December pace for single family housing was down 7 percent from the average dollar volume for the previous eleven months.

The 2018 amount for residential building was $323.5 billion, up 5 percent.  Multifamily housing grew 8 percent in 2018, rebounding from the 8 percent decline that was reported for 2017.  The largest multifamily projects that reached groundbreaking in 2018 were the $700 million City View Tower at Court Square in Queens, New York, the $580 million multifamily portion of the Winthrop Square Tower in Boston MA, and the $550 million Queens Plaza Park Apartments in Queens, New York.  The top five metropolitan areas ranked by the 2018 dollar amount of multifamily starts, with their percent change from a year ago, were – New York, up 2 percent; Boston, up 71 percent; Washington, D.C., up 26 percent; Miami, up 43 percent; and Los Angeles, down 11 percent.  Metropolitan areas ranked 6 through 10 were – San Francisco, up 23 percent; Seattle, up 25 percent; Dallas-Ft. Worth, up 24 percent; Chicago, down 28 percent; and Philadelphia, up 3 percent.  Eight of the top ten metropolitan areas for multifamily housing were able to report gains in 2018 relative to the prior year, comparing favorably to 2017 which saw only three of the top ten metropolitan areas reporting gains relative to the prior year.  Single family housing in 2018 grew 4 percent, a smaller increase than the 9 percent pickup in 2017.  By geography, single family housing in 2018 showed this pattern for the five major regions – the West, up 8 percent; the South Atlantic, up 5 percent; the South Central, up 4 percent; the Midwest, up 1 percent; and the Northeast, down 1 percent.

Nonbuilding construction in December was $165.5 billion (annual rate), down 9 percent from the previous month.  The electric utility/gas plant category plunged 74 percent from its improved amount of construction starts in November, which included a $3.0 billion liquefied natural gas export terminal in the Corpus Christi, Texas-area.  The largest electric utility/gas plant projects entered as December construction starts were a $500 million solar power plant in Georgia, a $303 million wind power plant in Oregon, and a $300 million wind farm in South Dakota.  In contrast, the public works categories in December rebounded 26 percent after sliding 29 percent in November.  Highway and bridge construction in December climbed 19 percent, helped by the start of the $360 million I-40 improvement project in the Raleigh, North Carolina-area.  The miscellaneous public works category (which includes site work, pipelines, and mass transit projects) surged 80 percent in December, boosted by the $500 million Dominion natural gas pipeline in West Virginia and Pennsylvania. The environmental public works categories posted gains in December, with sewer construction up 26 percent, river/harbor development up 8 percent, and water supply construction, up 4 percent.

The slight 0.3 percent increase for total construction starts at the national level in 2018 was the result of gains in four of the five major regions – the South Central, up 10 percent; the Midwest, up 4 percent; and the South Atlantic and the West, each up 1 percent.  The Northeast experienced a 15 percent decline for total construction starts in 2018, following its 20 percent jump in 2017 that included such construction starts as the $7.6 billion LaGuardia Airport project in Queens, a $5.8 billion ethane cracker facility in Monaca, Pennsylvania, and the $1.7 billion 50 Hudson Yards office tower in New York.