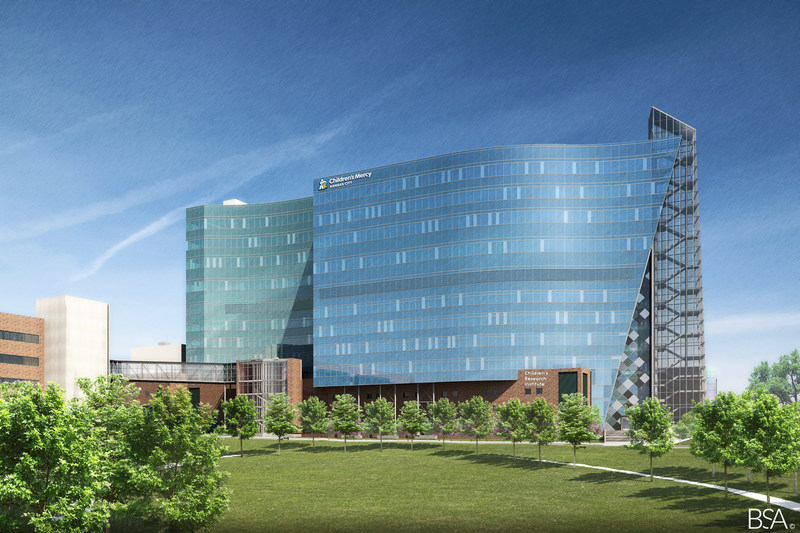 Two of Kansas City’s iconic families transformed the future of pediatric research – as well as the city’s downtown skyline – by joining together to donate $150 million to Children’s Mercy Kansas City. In January’s announcement, which totals the largest one-time gift ever made to a children’s hospital for pediatric research, the Hall Family Foundation and the Sunderland Foundation each donated $75 million to kickstart the construction of the future home of the Children’s Research Institute and accelerate the recruitment of top researchers from around the globe.

“In addition to exceptional clinical care, Children’s Mercy has always placed an emphasis on research and education to transform the future of pediatrics,” said Randall L. O’Donnell, PhD, President and CEO of Children’s Mercy Kansas City. “Thanks to the unparalleled generosity of the Hall and Sunderland families, our Children’s Research Institute will allow us to accelerate even more precise diagnoses and treatments for complex childhood diseases, so we can provide groundbreaking care for the most difficult medical cases right here in Kansas City and around the globe.”

Located on the hospital’s Adele Hall Campus in the heart of downtown Kansas City, the new research building consists of a nine-story structure making up approximately 375,000 square feet (see more building facts below). As a result, the Children’s Research Institute will house nearly six times more space for pediatric research than currently exists at Children’s Mercy. When fully staffed, Children’s Mercy will grow its research enterprise tenfold as a result of this donation – with everyone striving to find much-needed answers for kids and their families.

“We have an opportunity to change the lives of children by conducting research that will create more understanding and deliver cures or diagnostics that go beyond the individual patient,” said Tom Curran, PhD, FRS, Chief Scientific Officer at Children’s Mercy Kansas City, Executive Director of the Children’s Research Institute and the Donald J. Hall Eminent Scholar in Pediatric Research. “So, in a sense, by treating one child here at Children’s Mercy, we may impact thousands elsewhere. By learning from our patients, particularly those whose needs are not being met by the existing standard of care, we will constantly strive to move medicine forward. We owe it to our children to be the best, and to provide access to the latest science and technology.”

When Kansas City residents and visitors pass by the Children’s Research Institute, they will notice several of the windows are a different color from the rest. Those windows represent the genetic anomalies found in the DNA of children with specific rare diseases – just some of the difficult cases and questions the researchers inside the building are trying to solve.

A few facts about the new home for the Children’s Research Institute:

Learn more about the Children’s Research Institute and see renderings and a fly-through video at news.childrensmercy.org.

This announcement is just the latest milestone in pediatric research at Children’s Mercy:

“The Hall Family Foundation has believed in and supported the mission and work of Children’s Mercy, one of the city’s crown jewels, for a long time,” said Margaret Hall Pence, Hall Family Foundation Board of Directors. “It is our sincere honor to be able to make this level of commitment to further pediatric medical research, which is too often under-funded. In fact, the continued well-being of all children depends on private investment in scientific discovery, and we are so pleased the Sunderland family has joined us in making this important work possible. It is humbling to imagine how future advances in research made right here in Kansas City, at Children’s Mercy, will help and heal children near and far. Our desire is to leave a legacy that will strengthen this community and positively impact the lives of countless children and families for generations to come. The Children’s Mercy Research Institute represents that legacy.”

In 1943, Joyce and Elizabeth Hall, along with Joyce’s brother Rollie B. Hall, created the Hall Family Foundation to nurture and strengthen the city they loved. As outlined in the original bylaws, they intended that the Hall Family Foundation should promote the health, welfare and happiness of school-age children; the advancement and diffusion of knowledge; activities for the improvement of public health; and advancement of social welfare. These purposes were based on a family resolve to help people and enhance quality of life. More than 70 years later, their legacy lives on.