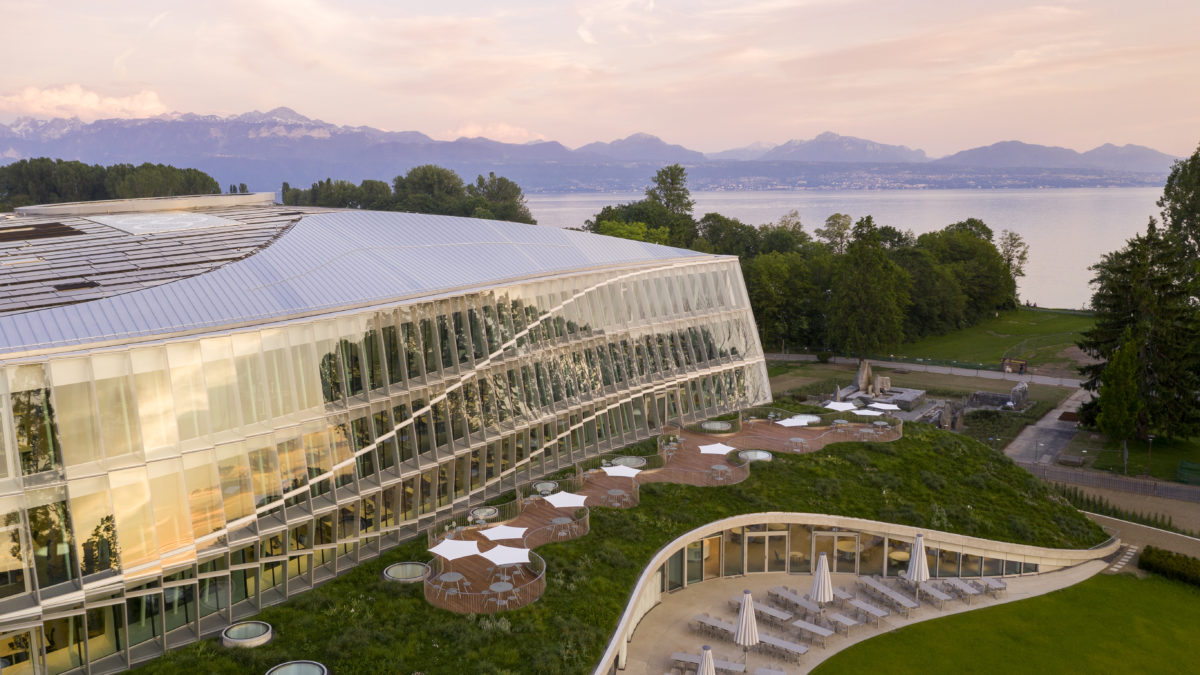 One of the three certifications is LEED Platinum – the highest certification level of the international LEED green building program. According to the U.S. Green Building Council, the organization that developed LEED, Olympic House has received the most points (93) of any LEED v4-certified new construction project to date.

With more than 98,000 registered and certified projects across 175 countries and territories, LEED (Leadership in Energy and Environmental Design) is the most widely used green building program in the world and an international symbol of sustainability excellence. It signifies that a building is lowering carbon emissions and conserving resources while prioritizing sustainable practices and creating a healthier environment. LEED Platinum is the highest level of certification possible.

In addition to receiving the LEED Platinum certification, Olympic House is the first international headquarters – and the second building overall – to obtain the highest (Platinum) level of the Swiss Sustainable Construction Standard (SNBS). It has also been awarded the Swiss standard for energy-efficient buildings, Minergie P. Olympic House is the first building to receive these three certifications, and the first in Switzerland to achieve LEED v4 Platinum.

“We are proud that Olympic House, as the new home of the Olympic Movement, has received such prestigious Swiss and international certifications, recognizing our strong commitment to sustainability, which is one of the three pillars of Olympic Agenda 2020,” said IOC President Thomas Bach. “From the very beginning of the original architecture competition, all the way through to construction, energy management and furnishings, the IOC focused very much on sustainable solutions. We are happy that our investment in sustainability has led to receiving these three certifications.”

Eighty percent of the investment in the building was spent locally, and more than 95 percent of the former IOC headquarters was reused or recycled. Solar panels and heat pumps using water from nearby Lake Geneva provide renewable energy to the building, which is expected to use 35 percent less energy and 60 percent less municipal water than conventional new construction.

Based in Lausanne, Olympic House will bring all the IOC staff under one roof. The new building will provide a meeting place for the global Olympic Movement. Olympic House is a privately-funded investment in sustainability, operational efficiency and the local economy and development.

With its shape inspired by the movement of an athlete, Olympic House combines the highest standards in architectural design with a holistic approach to sustainability. It incorporates rigorous criteria in energy and water efficiency, while optimising the health and wellbeing of its users. It pushes sustainability boundaries and has transformed the market – particularly with respect to construction materials and furniture, which comply with strict environmental standards.

“LEED v4 was designed to be the most rigorous green building rating system in the world. From improving energy performance to emphasising human health and integrative building design, LEED v4 is encouraging project teams to operate beyond the status quo,” said Mahesh Ramanujam, president and CEO of the U.S. Green Building Council. “Olympic House’s LEED Platinum certification demonstrates tremendous green building leadership and sets the IOC apart as a leader in sustainability in the international sports world.”

The project has involved unprecedented collaboration between local authorities, suppliers, academics and the IOC’s commercial partners. Worldwide Olympic Partner Dow provided solutions to enhance the building’s architecture and environmental performance. As the IOC’s Official Carbon Partner, Dow has also delivered a global carbon mitigation programme, which has already compensated the carbon emissions associated with the construction of the building and its operations until 2020. IOC Worldwide Mobility Partner Toyota has delivered zero-emission hydrogen cars, while another IOC Worldwide Partner, Panasonic, has supplied the audio-visual equipment needed to support remote and on-site meetings.