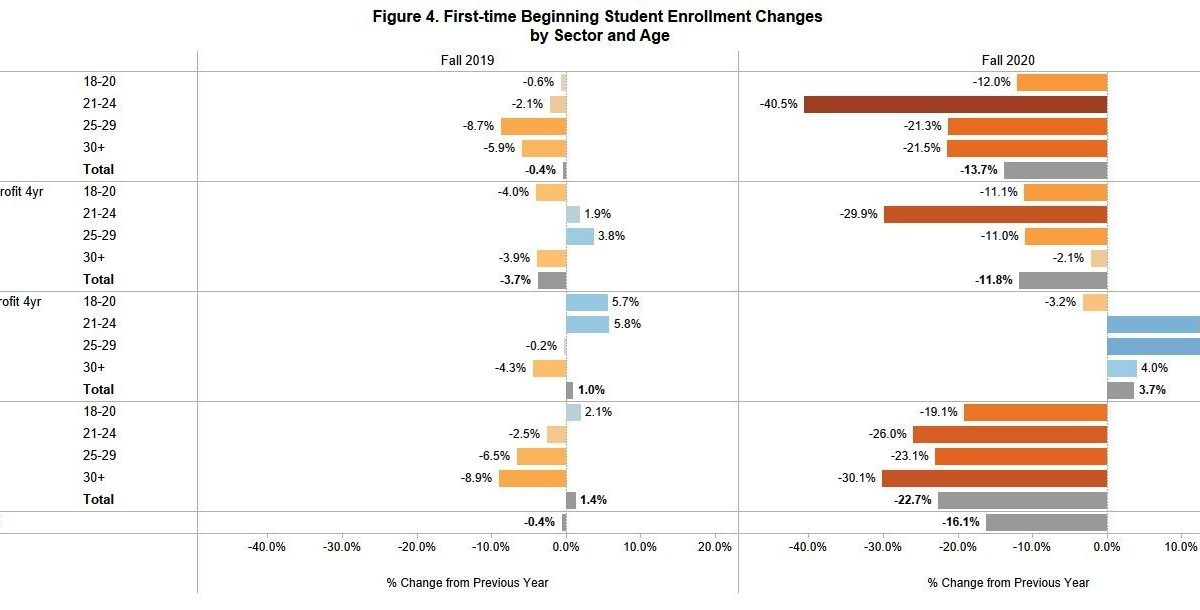 Freshman students are by far the biggest decline of any group from last year, with a decrease of 16.1% nationally and a 22.7% drop at community colleges in particular.

Roughly one month into the fall 2020 semester, undergraduate enrollment is now running 4% below last year’s level, and the upward trend for graduate enrollment has slipped to 2.7%, according to the latest data by the National Student Clearinghouse Research Center. As a result, overall postsecondary enrollment is down 3% compared to the same time last year.

“With more data, the downward trends identified in September’s First Look report appear steeper, while also emerging for more states and student groups,” said Doug Shapiro, Executive Director of the National Student Clearinghouse Research Center. “Most strikingly, freshman students are by far the biggest decline of any group from last year, with a decrease of 16.1% nationally and a 22.7% drop at community colleges in particular. First-time students account for 69% of the total drop in undergraduate enrollment.”

This second update for the fall 2020 series, Stay Informed with the Latest Enrollment Information, is based on 9.2 million students or nearly 54% of postsecondary institutions reporting to the Clearinghouse, as of Sept. 24. The next update is scheduled to be released Nov. 12.

Undergraduate enrollment is down at all types of institutions, except for private for-profit four-year colleges.

All student groups identified on a path of decline in the First Look report have fallen further.

The Research Center’s First Look Fall 2020 report in September showed undergraduate student enrollment declined 2.5%; graduate students increased 3.9%; and postsecondary enrollment as a whole down 1.8%, compared to September 2019. Those results were based on 3.6 million students or nearly 22% of institutions reporting to the Clearinghouse, as of September 10.

The next update to the Stay Informed with the Latest Enrollment Information is scheduled for November 12. Unlike the Research Center’s normal Current Term Enrollment Estimates’ report series, Stay Informed highlights year-over-year changes, using 2018 and 2019 historical data as pre-pandemic baselines and creating fixed panels of institutions that have submitted data as of each month. This allows the Research Center to provide early insights with preliminary data before the full enrollment reporting is completed for the term. The Research Center will update the data monthly, for various subgroups of students, programs, institutions, states, or regions.