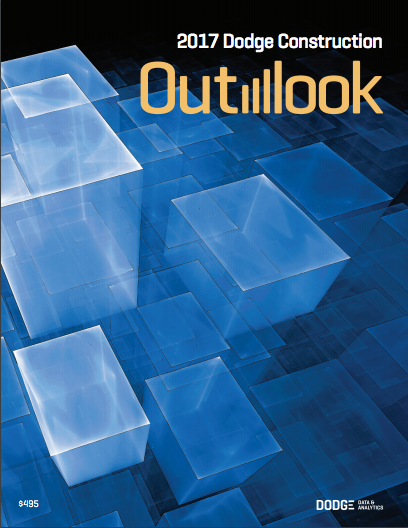 “Total construction starts during the first half of this year lagged behind what was reported in 2015, raising some concern that the current construction expansion may have run its course. However, the early 2016 shortfall reflected the comparison to unusually elevated activity during the first half of 2015, lifted by 13 very large projects valued each at $1 billion or more, such as a $9 billion liquefied natural gas export terminal in Texas and a $2.5 billion office tower in New York City. As 2016 has proceeded, the year-to-date shortfall has grown smaller, easing concern that the construction industry may be in the early stage of cyclical decline. Instead, the construction industry has now entered a more mature phase of its expansion, one that is characterized by slower rates of growth than what took place during the 2012-2015 period, but still growth. Since the construction start statistics will lead the pattern of construction spending, this means that construction spending can be expected to see moderate gains through 2017 and beyond.”

“On balance, there are a number of positive factors which suggest the construction expansion has room to proceed. The U.S. economy in 2017 is anticipated to see moderate job growth, market fundamentals for commercial real estate should remain generally healthy, and more funding support is coming from state and local bond measures. Although the global economy in 2017 will remain sluggish, energy prices appear to have stabilized, interest rate hikes will be gradual and few, and a new U.S. President will have been elected. For 2017, total construction starts are forecast to rise 5% to $713 billion. Gains of 8% are expected for both residential building and nonresidential building, while nonbuilding construction slides a further 3%.”

The pattern of construction starts by more specific sectors is the following:

Copies of the report with additional details by building sector can be ordered here or by calling (800) 591-4462.